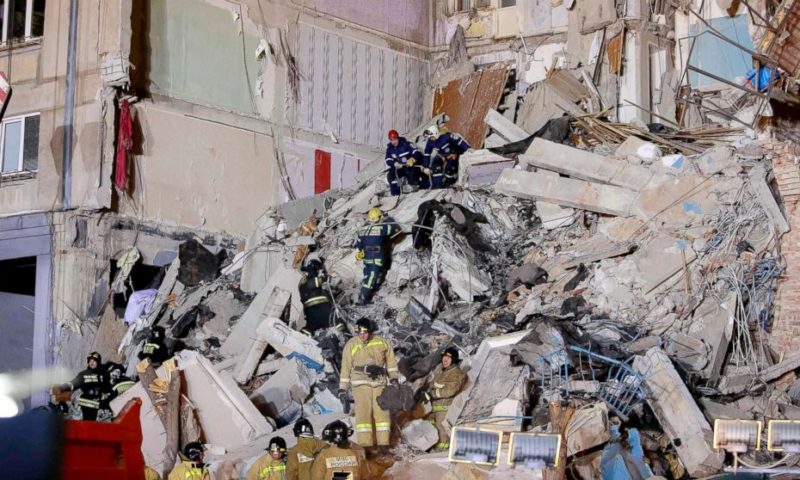 Russian investigators have denied reports that traces of explosives were found in the rubble of a residential building that was partially destroyed by a powerful blast on New Year’s Eve, but insisted they are considering “all possible causes”.

At least 28 people were killed when an explosion tore through a 10-storey building in Magnitogorsk, an industrial city in Russia’s Ural region, at about 6am on Monday. Fifteen people are still missing as rescuers continue to scour the ruins of the building in sub-zero temperatures.

Russia’s Investigative Committee, a law enforcement agency that answers to the country’s president, Vladimir Putin, said a gas leak was the most likely explanation for the blast, which occurred on the city’s Karl Marx Avenue.

The znak.com website cited an unnamed source who said the explosion was a “terrorist act”. The source, whose comments could not be independently verified by the Guardian, said investigators had discovered the blast originated in a second-floor apartment, where an unknown man is suspected to have stored explosives for a planned attack on a local shopping centre.

The man is reported to have moved into the apartment, which he was renting, on 30 December. Znak.com is a respected news website which has previously reported on the deaths of Russian military contractors in Syria.

The source also said security services had killed “three terrorists” after opening fire on their vehicle late on Monday. “They tried to shoot back,” he said. “One of them escaped and is being sought.”

Footage posted online by passersby showed a Gazelle minivan engulfed in flames and loud bangs that resembled gunshots. The incident took place opposite the city administration building, also located on Karl Marx Avenue, less than two miles from the site of the apartment blast. Investigators would only confirm three people had died when “gas canisters” exploded inside the minivan.

Boris Dubrovsky, the regional governor, said officers from the FSB security service were at the scene of the minivan blast, but insisted there was no link between the incident and the building explosion.

The Investigative Committee said: “In connection with various reports that have appeared in the media, it must be noted that at the present moment … no traces of explosives or their components have been found. Work to establish the causes of the tragedy is being conducted around the clock.”

Armed police with dogs also reportedly evacuated residents of a second tower block in Magnitogorsk late on Monday. Some residents of the building told local media that police said they were looking for a “bomb”.

The blasts have rekindled memories of a series of explosions that tore through four residential buildings in Moscow and other Russian cities in 1999, killing more than 300 people.

Critics accused the Russian security services of carrying out the explosions as part of a plot to ensure Putin, a former FSB chief, would secure the presidency in elections held in March 2000. A number of people from Russia’s North Caucasus region were later jailed over the blasts.

Xi Jinping says Taiwan ‘must and will be’ reunited with China