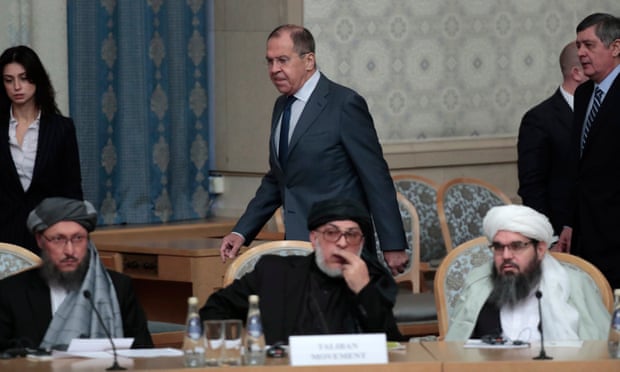 Russia has hosted talks with Taliban delegates and members of Afghanistan’s high peace council, as the Kremlin seeks a role as peace broker between Islamist rebels and the US-backed government in Kabul.

The meeting on Friday demonstrated Moscow’s renewed aspirations in Afghanistan almost 30 years after the Soviet Union withdrew its battered forces.

Russia’s foreign ministry touted the attendance of the Taliban, who sent a five-person delegation to Moscow from their political office in Doha, as unprecedented for an international conference aimed at peace in Afghanistan, although the meeting produced few concrete results.

The Afghan government did not send direct representatives to Friday’s talks, electing instead to send members of the peace council “in its own capacity as a national but non-government institution”.

The Afghan government and the Taliban both denied that the conference marked direct negotiations for peace. But Russia’s foreign ministry focused attention on the spectacle of delegates from both sides of the line in Afghanistan sitting together at Moscow’s President hotel, alongside representatives from Iran, China, Pakistan, Tajikistan, Uzbekistan and Turkmenistan.

“Participation in today’s event should become an important contribution to the creation of favourable conditions for the launch of direct talks between the government, the Taliban movement and representatives of the wide range of the country’s social and political circles,” said the Russian foreign minister, Sergei Lavrov, speaking during a short public introduction.

Moscow has sought a greater role in international diplomacy in recent years, with efforts at settling conflicts that often give a junior role to the US. Russia also initiated talks on a Syrian peace process co-sponsored by regional powers Turkey and Iran.

In both cases, the US has had an active military presence inside the countries. The US launched its intervention against Islamic State in Syria in 2014. US troops have been fighting in Afghanistan since the 2001 invasion that was launched to dismantle al-Qaida and topple the Taliban.

Sher Mohammad Abbas Stanekzai, the head of the Taliban’s political wing which has headquarters in Qatar, said the group would not negotiate directly with Kabul and demanded that all foreign troops leave Afghanistan.

The Taliban said they would continue direct negotiations with Washington, which have been spearheaded by the US diplomat Zalmay Khalilzad.

“We do not recognise the incumbent government as legitimate,” Stanekzai said, according to remarks carried by Russian news agencies. “Therefore, we won’t hold negotiations with it. Kabul didn’t even send a representative to this conference.”

Hamas Gets Funds From Qatar to Pay Civil Servants’ Salaries