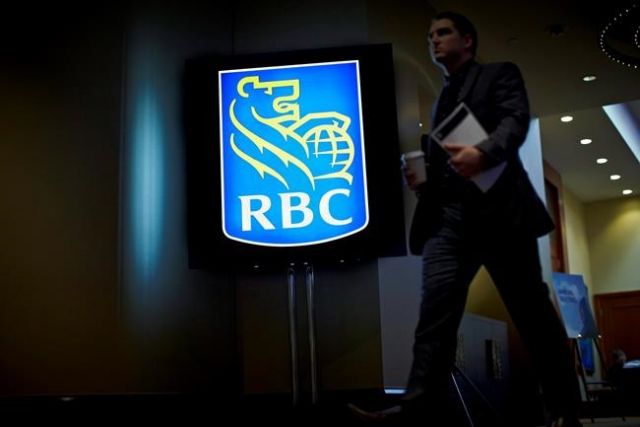 Royal Bank of Canada raised its dividend as it reported quarterly net income of $3.17 billion, up five per cent from a year ago, matching street expectations as market volatility during the period weighed on its earnings.

The Toronto-based lender hiked its quarterly payment to common shareholders by four cents to $1.02 per share.

The bank’s dividend increase Friday came as the lender reported solid earnings from its personal and commercial banking and insurance divisions for the quarter ended Jan. 31.

However, RBC also reported flat results from its wealth management arm and lower results in capital markets and investor and treasury services due to challenging market conditions.

RBC’s chief executive Dave McKay said it was a “strong start to the year” where the bank’s diversified business “really shows through in a quarter that had significant volatility, particularly in December,” impacting various divisions.

“But underlying all of that is significant client momentum, market share gains and great core activity that we’re able to earn through,” McKay told analysts on Friday. “We feel, as we pointed out, very good about the activity levels in our business and the momentum our business has heading into the rest of the year.”

Canada’s biggest lender by market value reported net income for the three-month period ended Jan. 31 that amounted to $2.15 per diluted share, compared with $2.01 one year ago.

After adjustments, RBC earned $2.19 per diluted share, matching the $2.19 per share expected by analysts, according to Thomson Reuters Eikon.

However, its other divisions came under pressure from the tumultuous market performance during the quarter. North American markets saw a sharp selloff at the end of last year amid political tensions including a trade battle between China and the U.S., but saw a recovery in January.

RBC’s wealth management arm delivered earnings of $597 million, flat from the same period a year ago, due to factors including higher costs related to business growth and “lower transaction volumes as uncertainty impacted equity markets.”

RBC’s investor and treasury services arm saw net income drop 26 per cent to $161 million, primarily due to lower funding and liquidity revenue, higher costs in support of business growth and lower revenue from its asset services business due to challenging market conditions and lower client activity.

Earnings for RBC’s capital markets division totalled $653 million, down 13 per cent from a year earlier, largely due to higher provisions for credit losses and lower revenue in corporate and investment banking and lower issuance activity.

While RBC’s earnings per share for the quarter was in line with expectations, the bank’s results were of “lower quality,” said Scott Chan, an analyst with Canaccord Genuity Capital Markets, in a note to clients.

“In the context of (RBC)’s share price appreciation heading into the quarter, we view these results as underwhelming and expect the stock to relatively underperform,” Chan wrote.