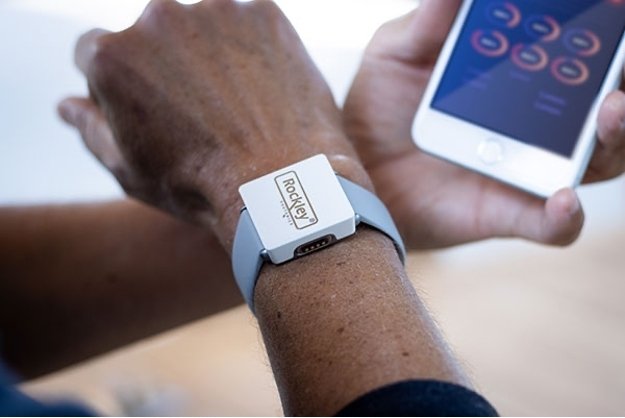 Smartwatches are about to get a whole lot smarter. Rockley Photonics has pulled back the curtain on a health monitoring platform equipped with high-tech sensors to continuously monitor a range of biomarkers from blood pressure to glucose levels, all from the wearer’s arm.

Rockley is touting the system as a “clinic on the wrist,” since it goes beyond simply measuring health data, by sending the collected data to a smartphone app for further analysis by Rockley’s own machine learning algorithms.

The wearable sensors are able to analyze a wearer’s skin, blood and extracellular fluid to measure core body temperature and blood pressure, as well as hydration, muscle lactate, alcohol and glucose levels, among other features—far outpacing the abilities of current smartwatch models.

That’s because, instead of relying on the now-familiar green LEDs used by most wearables to detect heart rate from the outermost skin layer, Rockley has loaded its system with infrared spectrophotometers—sensors housed on a single silicon chip that can probe much deeper into the body, and pick up biomarkers previously measured only by specialized medical equipment.

“This is more ground-breaking than the first touchscreen or voice recognition in your smartphone and will change the way we monitor our health going forward. Our module compresses the sensing capabilities of a tabletop clinical spectrometer into a wearable chip that could be carried on your wrist,” CEO Andrew Rickman said of the technology on a March investor call.

“Our technology is up to 1 million times more accurate than existing LEDs you see in high-end smartwatches today,” Rickman continued. “There is no precedent for this type of exponential increase in accuracy in recent history.”

Rockley plans to test out the wearable through a handful of in-human studies over the next several months. From there, it plans to target both consumer electronics and medical device makers to incorporate the sensor tech into smartwatches and fitness trackers, as well as clinical monitoring devices.

That rollout will undoubtedly receive a boost from Rockley’s ongoing plans to go public through a reverse merger with blank-check company SC Health Corp. When those plans were announced in March, Rickman noted that the SPAC deal would help speed up the commercialization timeline for its end-to-end sensor system.

Once the transaction is complete, Rockley is expected to have an enterprise value of $1.2 billion and will be listed on the New York Stock Exchange as “RKLY.” It’ll come out of the deal with approximately $323 million in proceeds, which will include a private investment round from a handful of backers that include medtech giant Medtronic.

Potentially first in line to pick up the spectrophotometers is Apple, which has been listed as Rockley’s largest customer, and just one of two that have accounted for more than 99% of Rockley’s revenues since 2019.

Apple and Rockley have been working together since 2017, during which Apple is estimated to have committed at least $70 million to Rockley in research and development funding. At the top of Apple’s wish list from its partnership with Rockley is glucose tracking, a feature that the tech giant has reportedly been chasing for its eponymous smartwatch for the last several years.

It seems likely that that dream will finally become a reality now that Rockley has unveiled its new all-encompassing spectrophotometer technology, especially since Rockley said in an SEC filing earlier this year that it expects Apple to continue making up the bulk of its revenues for the foreseeable future.