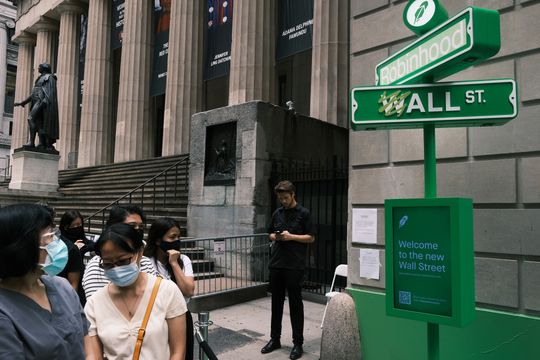 We are almost two days into what has historically been a bummer of a month for stock investors. Given the list of worries piling up, and those include Friday’s jobs data and the shadow of last September’s nasty 10% slide, “the market is likely to be bound for choppiness,” any way you slice it, notes MarketWatch’s Mark DeCambre.

Yet investors are hanging in there, and who can blame them as there just aren’t a ton of alternatives. In a fresh missive, former bond king Bill Gross said Treasuries have joined cash in the “trash” pile, with the yield on the 10-year note TMUBMUSD10Y, 1.330% destined to climb. And he warned equities could join that club, barring “double-digit-plus” earnings growth.

Onto our fear-not call of the day from JPMorgan strategists who say that until retail investors stop charging into stocks, markets probably don’t have too much to worry about.

“What could cause an equity market correction? This question is admittedly difficult to answer. So far this year, retail investors have been buying stocks and equity funds at such a steady and strong pace that makes an equity correction looking rather unlikely,” wrote Nikolaos Panigirtzoglou and a team of strategists in a note late Wednesday.

The strategists point to year-to-date equity fund flows of nearly $700 billion, or more than $1 trillion annualized, well above the prior 2017 record high of $629 billion. Those flows have not only pushed stocks higher, but forced other investors into equities, explains Panigirtzoglou and the team. And we’re not talking just any old retail investor. Hello, Robinhood HOOD, -0.18% traders.

“As certain retail investors, most likely the younger cohorts, buy stocks and equity funds aggressively they push the equity market up strongly, making ‘other’ retail investors, i.e. the older cohorts, inadvertently more overweight equities,” he said. And the latter group has been buying bond funds to try and rebalance, which has brought those flows near to a previous record high seen in 2019, said the bank.

“Whether the coming Fed policy change changes retail investors’ attitude toward equities remains to be seen. Monitoring this retail flow on a daily and weekly basis going forward is key to the equity market outlook in our mind,” said the strategists.

The remnants of Hurricane Ida flooded streets and subways and disrupted travel in New York, putting it in a state of emergency and resulting in the deaths of eight people so far, while parts of New Jersey were battered by tornadoes. That’s as a Pennsylvania dam is in trouble and Louisiana suffers on.

With one day to go until nonfarm payrolls, data showed weekly jobless claims falling to a pre-pandemic low of 340,000 even amid the delta variant’s surge. Second-quarter productivity data was revised down and the U.S. trade deficit narrowed, while factory orders for July are still ahead.

Moderna MRNA, +1.98% has asked the Food and Drug Administration to evaluate its COVID-19 booster candidate, which the drug company says “shows robust antibody responses against the delta variant.” That’s as a new study shows double vaccinations nearly halve the risk of long COVID.

Citing concerns about moviegoer attendance amid the ongoing pandemic, ViacomCBS VIAC, +0.31% -owned Paramount has pushed back release dates for “Top Gun: Maverick” from this November to next May, while another Tom Cruise flick “Mission: Impossible 7” was moved to autumn 2022.

A divided Supreme Court refused to block a restrictive abortion law in Texas that went into effect on Wednesday. But they suggested other challenges can still be brought.

Those waiting to snap up Tesla’s TSLA, -0.23% revamped Roadster will have to wait until 2023, due to “super crazy supply chain shortages, tweeted the electric car maker’s chief executive officer Elon Musk on Wednesday. And that date is hinging on no “mega drama” in 2022, he added.

Shares of INmune Bio INMB, +0.63% are climbing after the clinical-stage immunology company announced positive results from a study of its Alzheimer’s treatment.

Alibaba BABA, -0.74% is climbing after a report that the Chinese tech giant will donate $15.5 billion by 2025 for the country’s “common prosperity.” That may just keep regulators in the country at bay.

Retail investors also fueled an August revival in cryptocurrencies, but also made them look “frothy” again, cautions our chart of the day, also from strategist Panigirtzoglou and the team at JP Morgan.

“The previous phase of retail investors’ ‘mania’ into cryptocurrency markets was between the beginning of January and mid-May when the share of ‘altcoins’ had risen from 13% to 37.6%. While far from the record high of 55% seen in January 2018, at 32.6% the share of ‘altcoins’ looks rather elevated by historical standards and in our opinion it is more likely to be a reflection of froth and retail investor ‘mania’ rather than a reflection of a structural uptrend,” said the team.

Meanwhile, they note that the share of bitcoin BTCUSD, 2.54% is looking “uncomfortably low,” at 42%.