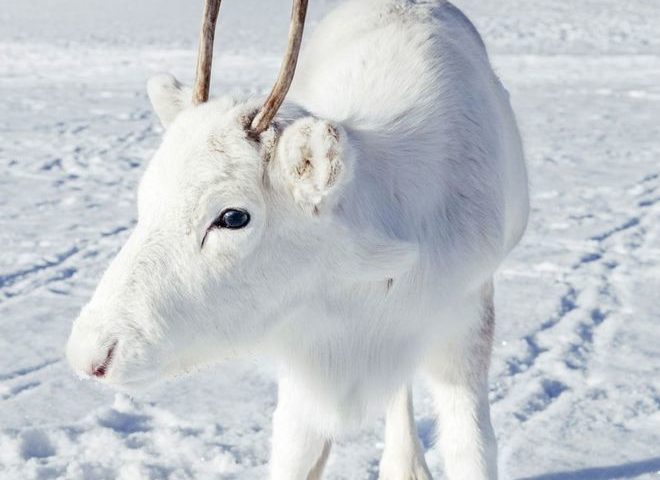 A Norwegian photographer has shared images of a rare white reindeer calf he encountered while hiking with friends.

Mads Nordsveen, 24, from Oslo, said he spotted the animal in the snow on a walk in northern Norway.

The images, where the animal almost fades into the landscape, has now been liked almost 20,000 times since they were posted on Monday.

Sharing the images on Instagram, the photographer commented: “He almost disappeared into the snow!”

White reindeers are considered very rare. In 2016 a white stag was spotted on a road side in Mala, in northern Sweden.

Their unusual appearance is caused by a genetic condition that strips the pigment from their fur, but not albinism.

According to some Scandinavian traditions, spotting a white reindeer is considered a sign of good luck.

Mr Nordsveen told the Caters news agency he spotted the “small, wonderful creature” while walking out in the mountains.

“He came to me very close and we looked into each other’s eyes. He was very calm when he saw that I did not have bad intentions,” the photographer said.

“He behaved as if he was posing for my photos… he was very curious and funny, like a little explorer”

The animal reportedly left him and his friends after a few minutes, when he returned to his mother at the edge of the forest.

Mr Nordsveen has described the encounter as “very magical” and a “fairytale moment”.