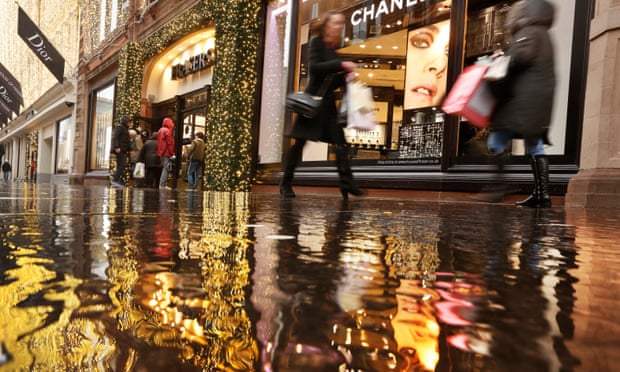 Drop of 4.3% compared with same month last year is twice the decline rate at retail parks

The number of visitors to high streets fell by 4.3% in November compared with the same month last year, twice the rate of decline of retail parks, which fell by 1.8%, according to new figures from Springboard, a data company.

Parts of Yorkshire, the Midlands, Lincolnshire, north-east England and the eastern fringes of Scotland were particularly affected by heavy rainfall and flooding during November, with more than twice the normal level in some places, according to the Met Office.

The Springboard analyst Diane Wehrle said that while high streets always tend to suffer more from rain than other shopping destinations, many retail parks had also taken action to slow their rate of decline, including by adding more restaurants.

Overall retail footfall across the high street, shopping centres and retail parks declined by 3.4% year on year in November, said Springboard, based on data from 480 shopping locations.

Black Friday, the day on which retailers offer heavy discounts to kick off the Christmas shopping season, fell on 29 November this year, meaning it was outside of the period covered by Springboard’s figures.

Early figures suggested that the event may have offered some relief to struggling retailers, with Barclaycard reporting transaction values up 16.5% year on year from data covering about a pound in every £3 spent in the UK. Springboard’s early data suggested that Black Friday footfall increased by 3.3% year on year, although Wehrle said that may have been driven by steep discounting that could eat into retailers’ profits.

Any short-term boost from Black Friday would come against the backdrop of a structural decline in bricks-and-mortar retailers in favour of online shopping. Online sales as a proportion of all retailing increased to 19.2% in October 2019, according to the Office for National Statistics – a percentage point higher than October 2018.

At the same time, British businesses have had little let-up from Brexit uncertainty, compounded by the run-up to Thursday’s general election. Some economists have suggested that relatively strong pay growth, a driver of higher consumption, may have peaked amid gloomy forecasts for the economy.

The ONS retail figures showed that the quantity bought in retail sales increased by only 0.2% in the three months to October 2019 when compared with the previous three months, the lowest growth since April 2018.

The pressures on retailers have prompted drastic action: more than 85,000 jobs were axed over the 12 months to October, according to the British Retail Consortium.

It has also put particular scrutiny on retail property owners. The investment manager M&G on Wednesday announced that it had suspended withdrawals of money from its property portfolio fund, saying that an unusually high level of investors had asked to get their money back.

Investors have withdrawn £2.8bn from 15 major open-ended commercial property funds in the past year, according to the data firm Morningstar.

Climate Scientists Try to Cut Their Own Carbon Footprints