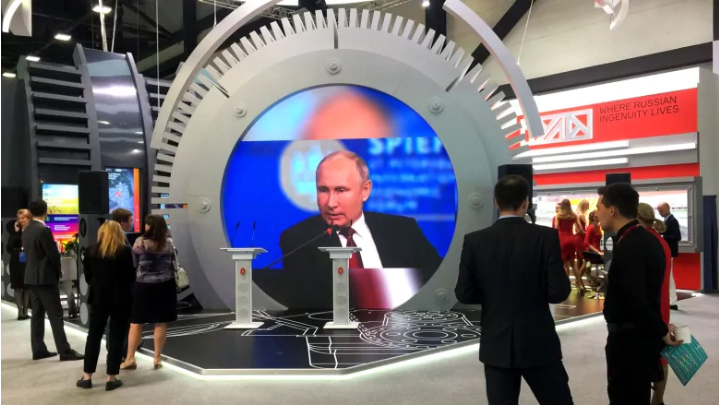 St. Petersburg Economic Forum drew investors and politicians from across the globe

After five years of crippling Western economic sanctions and Russian counter-sanctions, the fear factor of doing business in Russia may be easing just a bit, at least according to some Canadian business leaders.

“There are opportunities in Russia,” said Nathan Hunt, head of the Canada Eurasia Russia Business Association, who was taking part in the St. Petersburg Economic Forum this week. “We have seen our membership grow over the last two years, because companies know that in this climate, they can still make money.”

Still, serious doubts persist about doing business in a country where the prosecution system is highly politicized, and many of the largest corporate players fall under the direct control of the Kremlin.

Initially conceived as Russia’s rival to the Davos Summit in Switzerland, the St. Petersburg event is the largest business gathering of the year in Russia, and brings together leaders in politics and industry from around the globe.

But this year in particular, it’s been overshadowed by the prosecution of prominent American investor Michael Calvey, who is currently under house arrest in Moscow.

Calvey, the founder and CEO of the Russian investment firm Baring Vostok, helped kick-start some of Russia’s best-known private companies, such as Yandex. He is accused of fraud involving a Russian bank in which his company held shares.

Many observers in Russia and beyond believe the charges are bogus. Calvey’s case came up frequently during panel discussions this week as an example of the politicization of the Russian justice system, and why many foreign investors continue to be spooked.

‘The impact is quite predictable’

In an attempt at damage control, a Kremlin spokesman suggested Calvey could be temporarily released from house arrest so he could attend the St. Petersburg get-together, but prosecutors ultimately said no.

When asked directly about his feelings about Calvey’s arrest, Russian President Vladimir Putin demurred, saying only that Russian law must be respected and the financier would have a chance to clear his name at trial.

Andrey Burgov, a senior vice-president of Russia-based Norilsk, one of the world’s largest metals producers, characterized the case as “tragic.”

Lou Naumovski, a former Canadian trade diplomat and mining executive with decades of experience in Russia, said the Calvey case has underscored the huge risks that come with investing in the country.

“The impact is quite predictable — it’s been very bad,” he said of the Calvey case. The Russian business website RBC has reported that direct foreign investment in the country has dropped significantly since 2014, and has accounted for only 0.2 per cent of gross domestic product the last four years.

“Russia is sufficiently comfortable with its economic resilience, so that the negative message that this has with foreign investors is not as concerning as it should be. It should be very concerning [to Russia], but it’s not.”

Like Hunt, Naumovski said there are opportunities for Canadian companies, provided they are prepared for the more challenging regulatory environment, as well as unpredictable, if inevitable obstacles presented by Russian authorities.

“My bottom-line message is that if you are in the right area of interest to Russia …  those gaps can be filled by Canada.”

Nathan Hunt of CERBA said he sees opportunities in the agriculture sector, renewable energy and in servicing Russia’s mining and energy sectors.

“But you have to be careful and you have to educate yourself and you can’t give up,” Naumovski said.

In 2014, Canada joined the United States and the European Union in imposing sanctions on Russian banks and the oil sector following Russia’s annexation of the Crimean peninsula — and, later, its ongoing support for separatist fighters in eastern Ukraine.

Subsequent rounds of economic and political sanctions were aimed at Russia following the shooting down of a Malaysian Airlines passenger jet by a Russian missile in Eastern Ukraine and the poisoning of Sergei and Yulia Skripal in Salisbury, England, in 2018.

Despite a near-constant flow of upbeat economic news from state television and Kremlin-friendly media sources, independent polling suggests Russians are increasingly restless about their economic situation.

More than 20 per cent of Russians live below the official poverty line, and Russia’s parliament has hiked taxes and cut pensions for older Russians, leading to a decrease in real wages.

In his speech at the St. Petersburg forum, Putin took aim at the U.S. for trying to use its economic muscle to dominate other countries, and for using trade wars as an instrument of foreign policy.

He also accused the U.S. of trying to spread American law around the globe by sanctioning foreign companies that violate U.S. trade embargoes.

“It extends their jurisdiction across the whole world,” Putin told the delegates, suggesting U.S. policy is a detriment to global growth. “It does not meet the challenges of the future.”

Russia’s growing trading relationship with China has been the centrepiece of discussions at the St. Petersburg forum, with Chinese President Xi Jinping the guest of honour.

Russia’s government has signed contracts for controversial Chinese telecom giant Huawei to help develop Russia’s next generation of 5G networks, and he slammed what he characterized as U.S.-led efforts to ban Huawei from the marketplace.

Canadians have run ‘hot and cold’

While representatives of several Canadian companies and business groups attended the forum, Canada’s trade with Russia is but a footnote.

Canadian exports were almost halved after 2014, when Russia stopped importing Canadian pork and many seafood products.

While he was working in Canada’s embassy in Moscow in 1989, Naumovski helped organize a trade mission involving 250 Canadian business leaders to Russia. He said he’s currently working with several clients looking to invest in Russia, but believes Canada has “squandered” many opportunities over the years to build stronger trade links with Russia.

“Canadians have run hot and cold [on] this market,” he said. “My conviction is that if you trade with Russia, you are not necessarily perpetuating any bad Russian international political behaviour. You are addressing communities that could benefit from what you as a company could offer.”

Mnuchin to Hold 1-On-1 Chat With PBOC Gov. Yi