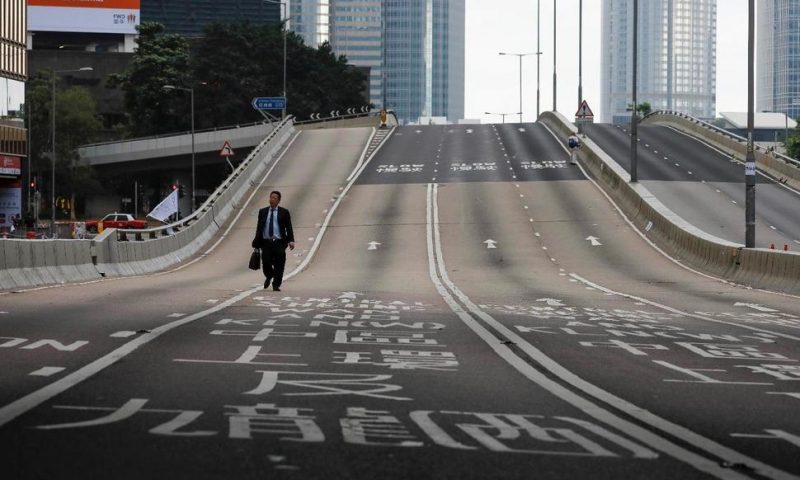 Lam, addressing reporters after a long weekend of more turmoil, said tourism arrivals were down by half and that hotels and retailers were suffering.

Lam said she did not have the data with her. But empty streets and tourist attractions are evidence of the fallout from the protests that began in June over a now-shelved extradition bill that would have allowed some criminal suspects to be sent to mainland China for trial.

Initially, the protests caused little damage and were confined to an area near Hong Kong government offices. But they’ve since spread to many parts of the former British colony, which enjoys freedoms guaranteed to the semi-autonomous region of about 7 million people when Beijing took control in 1997.

The demonstrations have gradually escalated into a broader anti-government movement that has grown increasingly violent, with protesters targeting shops and banks.

The city’s airport has been periodically besieged by protesters, and some train and subway lines and shopping malls have suffered significant disruptions from the demonstrations.

Lam warned that the Chinese military might intervene if need be but said she hoped to revolve the unrest at the local level.

So far, Hong Kong’s stock exchange has kept steady, and the benchmark Hang Seng index gained 0.5% on Tuesday. Prices have been supported by ample demand since shares listed in Hong Kong are perceived as being relatively cheap, says veteran investment manager Francis Lun.

But tourism and retailing are languishing, and some investors are shifting money out of the city, Lun says

Analysts say the political turmoil and the risk of intervention by Beijing could undermine Hong Kong’s status as a world financial hub.

“Unless it stops soon…it’s really Hong Kong’s survival at stake,” he told The Associated Press.

Goldman Sachs has estimated that between $3-$4 billion has been moved to Singapore from Hong Kong since August, based on estimates from bank deposit information.

Economic growth slowed to 0.5% year-on-year in the April-June quarter from a 3% rate of expansion in 2018.

The government has forecast growth in full-year 2019 likely will slow to 0%-1%.

Protesters are demanding Lam’s resignation even after she withdrew legislation that provoked the latest rounds of turmoil. They also want investigations into the handling of the protests by police.

World Bank: Trade Tensions Could Block Path Out of Poverty