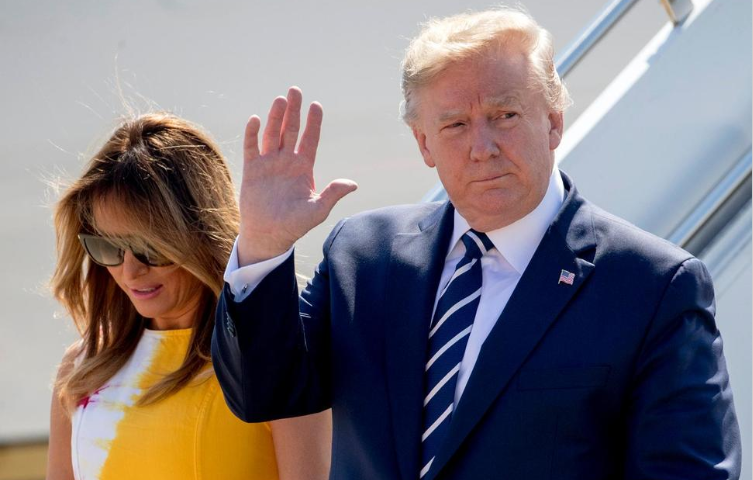 President Donald Trump is threatening to use the emergency authority granted by a powerful, but obscure federal law to make good on his tweeted “order” to U.S. businesses to cut ties in China.

BIARRITZ, France — President Donald Trump is threatening to use the emergency authority granted by a powerful but obscure federal law to make good on his tweeted “order” to U.S. businesses to cut ties in China amid a spiraling trade war between the two nations.

China’s announcement Friday that it was raising tariffs on $75 billion in U.S. imports sent Trump into a rage and White House aides scrambling for a response.

Trump fired off on Twitter, declaring American companies “are hereby ordered to immediately start looking for an alternative to China.” He later clarified that he was threatening to make use of the International Emergency Economic Powers Act in the trade war, raising questions about the wisdom and propriety of making the 1977 act used to target rogue regimes, terrorists and drug traffickers the newest weapon in the clash between the world’s largest economies.

It would mark the latest grasp of authority by Trump, who has claimed widespread powers not sought by his predecessors despite his own past criticism of their use of executive powers.

“For all of the Fake News Reporters that don’t have a clue as to what the law is relative to Presidential powers, China, etc., try looking at the Emergency Economic Powers Act of 1977,” Trump tweeted late Friday. “Case closed!”

The act gives presidents wide berth in regulating international commerce during times of declared national emergencies. Trump threatened to use those powers earlier this year to place tariffs on imports from Mexico in a bid to force the U.S. neighbor to do more to address illegal crossings at their shared border.

It was not immediately clear how Trump could use the act to force American businesses to move their manufacturing out of China and to the U.S, and Trump’s threat appeared premature — as he has not declared an emergency with respect to China.

Even without the emergency threat, Trump’s retaliatory action Friday — further raising tariffs on Chinese exports to the U.S. — had already sparked widespread outrage from the business community.

“It’s impossible for businesses to plan for the future in this type of environment,” David French, senior vice president for government relations at the National Retail Federation, said in a statement.

The Consumer Technology Association called the escalating tariffs “the worst economic mistake since the Smoot-Hawley Tariff Act of 1930 — a decision that catapulted our country into the Great Depression.”

And trade association CompTIA stressed the logistical strain that would follow if companies were forced to shift operations out of China, saying it would take months for most companies.

The frequent tariff fluctuations are making it hard to plan and are casting uncertainty on some investments, said Peter Bragdon, executive vice president and chief administration officer of Columbia Sportswear.

“There’s no way for anyone to plan around chaos and incoherence,” he said.

Columbia manufactures in more than 20 countries, including China. This diversification helps shield the company from some fluctuations, but China is an important base for serving Chinese customers as well as those in other countries, Bragdon said. The company plans to continue doing business there.

Presidents have often used the act to impose economic sanctions to further U.S. foreign policy and national security goals. Initially, the targets were foreign states or their governments, but over the years the act has been increasingly used to punish individuals, groups and non-state actors, such as terrorists.

Some of the sanctions have affected U.S. businesses by prohibiting Americans from doing business with those targeted. The act also was used to block new investment in Burma in 1997.

Congress has never attempted to end a national emergency invoking the law, which would require a joint resolution. Congressional lawmakers did vote earlier this year to disapprove of Trump’s declared emergency along the U.S.-Mexico border, only to see Trump veto the resolution.

Even Before Photo Op of G-7 Allies, Sharp Elbows Come Out