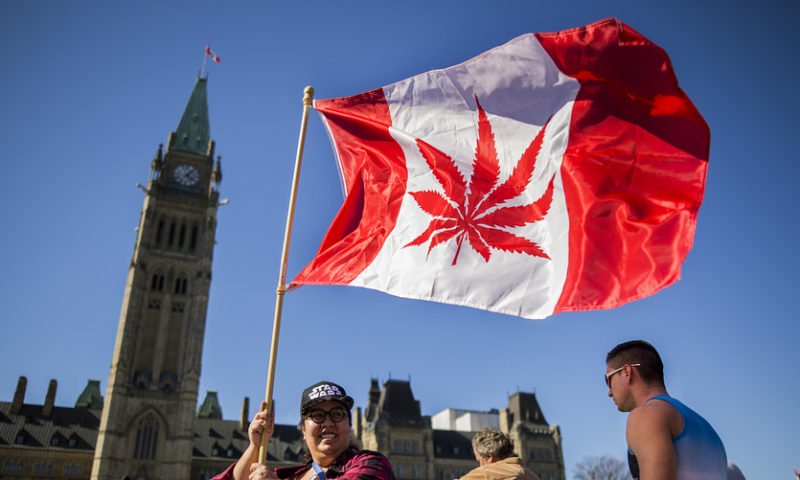 Aurora Cannabis and Canopy Gorwth to show off legal-pot earnings; Pepsi and Coke square off; Nvidia and Activision follow rough week for videogames

Recreational marijuana was legalized in Canada last October. The smoke signals are about to arrive on Wall Street.

Two of the largest publicly traded Canadian cannabis producers, Aurora Cannabis Inc. ACB, -2.32% ACB, -3.40%  and Canopy Growth Corp. CGC, -3.11%WEED, -3.40%  , will release earnings reports in the coming days that detail sales from the first quarter of legal sales in the country. After reports of shortages and overall supply-chain issues in Canada’s newest industry, cannabis investors could see less green and more red after the numbers, though pot stocks have already come back closer to earth.

Elsewhere, graphics-chip provider Nvidia Corp. NVDA, +0.51% faces the music after twice cutting its outlook, and joins equipment supplier Applied Materials Inc. AMAT, -0.35% in testing chip-sector volatility during the week. PepsiCo Inc.’sPEP, -0.07%  report will serve as an introduction to the company’s new chief executive, and Activision Blizzard Inc. ATVI, -1.25%  takes the joystick after a meltdown from other videogame publishers.

For cannabis companies, the first quarter of legal weed sales in Canada may be less about the pot and more about the paper. Companies like Aurora — which has investments in lots of other pot companies — are going to show paper losses from the decline in their investments, while others could use the maturation of their pot plants to claim profit well before the weed is sold.

Once other producers, like Tilray Inc. TLRY, -0.94%   and Cronos CRON, -8.73%CRON, -8.28%  , report earnings, investors will have a fuller picture of how the legal recreational market is shaking out in Canada.

Aurora Cannabis reports before the bell on Monday while Canopy Growth reports after the close on Thursday.

Nvidia has preannounced negative results for the holiday quarter, but the company’s Thursday-afternoon earnings call will mark management’s first discussion with the investment world since that bad news. Expect questions about the scope of Nvidia’s problems in China, the trajectory for its new Turing products, and the potential for a rebound in the data-center business. The company’s capital-return plans and expense discipline will also be in focus given a material drop in revenue, according to Jefferies analyst Mark Lipacis.

Semiconductor-equipment company Applied Materials, also reporting on Thursday, will follow in the footsteps of peers Lam Research Corp. LRCX, -0.24% and KLA-Tencor Corp. KLAC, +0.11% both of which offered encouraging signals of an imminent industry recovery a couple of weeks back.

But questions remain about the outlook for chip-equipment companies. Evercore ISI’s C.J. Muse wonders if investors have seen “the last cut” in equipment build plans or if there’s one more on the way.

Activision Blizzard will be the last major videogame publisher to report, and investors will find out if the company is suffering from the same issues as rivals Electronic Arts Inc. EA, +16.05%  and Take-Two Interactive Software Inc.TTWO, +0.78%  In general, the legacy publishers are struggling to adapt to a “Fortnite” world: EA admitted this past week that it should have included a “battle royale” option with its recent “Battlefield” launch. That’s a reference to the gameplay mode made popular by Epic Games’ free-to-play “Fortnite.” Activision’s earnings arrive Tuesday afternoon.

The beverage giants will post back-to-back reports this week, and Pepsi’s new chief executive, Ramon Laguarta, will make his first earnings-call appearance. A key focus will be the company’s Frito-Lay North America segment, as Deutsche Bank’s Steve Powers said there will likely be “significant disappointment” on Wall Street if Pepsi shows any “wobble” in its healthiest business. Pepsi’s earnings are scheduled for Friday morning.

With Coke, HSBC Securities analyst Carlos Laboy is interested in finding out if the company is considering selling its equity stakes in its bottlers, writing recently that the equity-stake arrangement was devised “for good reasons in a different era for purposes that no longer exist.” The company posts results on Thursday before the market opens.

Cisco will give a read on demand for networking equipment with its Wednesday-afternoon report, which can give strong clues on the health of the tech ecosystem and global economy. The company may have seen better-than-expected demand due to tariff effects in the January quarter, said Piper Jaffray’s Andrew Nowinski, but these gains could have come at the expense of the current quarter’s numbers. That means there’s potential for a light outlook, he noted.

Rival Arista Networks Inc. ANET, +2.75%  follows the next day. The company has a history of delivering revenue ahead of its prior forecasts, and William Blair’s Jason Ader expects Arista to keep that streak alive. There’s been concern about a slowdown in cloud capital expenditures, he said, but “cloud titans” like Amazon.com Inc. AMZN, -1.62%  and Microsoft Inc. MSFT, +0.38%  showed strength in their own reports.