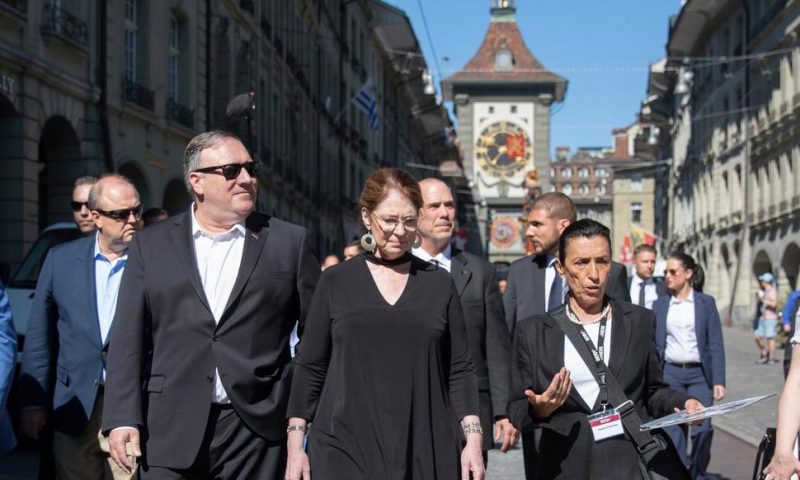 Secretary of State Mike Pompeo joins presidential adviser Jared Kushner and other elites at a Bilderberg Group event in Switzerland, with many attendees uneasy about the wrecking ball President Donald Trump’s administration has taken to postwar order.

MONTREUX, Switzerland — U.S. Secretary of State Mike Pompeo on Saturday joined Jared Kushner at a closed-doors meeting of the Bilderberg Group in the Swiss resort of Montreux, with many attendees uneasy about what one protester called the “wrecking ball” that President Donald Trump’s administration has taken to the postwar international order.

The four-day meeting that ends Sunday comes as Trump critics argue that his rhetoric and policies are a threat to the globalist postwar stability that was largely born of U.S. leadership. Trump supporters counter that the United States has been taken for granted for too long and its needs must now come first.

Private security and Swiss police cordoned off sidewalks and limited traffic near the bright-yellow Fairmont Le Montreux Palace overlooking Lake Geneva, where the meeting was taking place this year. A handful of placard-waving protesters voiced their opposition peacefully outside the gates.

The event, which aims to foster dialogue between experts from North America and Europe, is closed off to the public, and attendees are encouraged to keep quiet about what is said inside. On the agenda this year were topics like Europe, China and Russia, climate change, the future of capitalism and cyberthreats.

The meeting’s theme this year — “A Stable Strategic Order” — was something that Trump critics said the U.S. leader and his advisers should ponder.

“What we have is an administration that is behaving like a unilateralist wrecking ball,” said Ken Oye, an MIT political science professor on sabbatical in Switzerland, who came to protest.

He predicted those are the meeting “are likely to be telling him ‘that you’re not serving American interests or international interests more broadly defined. You’re making a mistake, and here are the reasons why we believe so.'”

Many at the meeting have championed cooperation in tackling international issues and have bemoaned Trump’s “America First” approach, which has broken with decades of U.S. policy.

In addition to Kushner and Pompeo, both of whom are currently on major diplomatic missions, at least two senior Pentagon officials and two senior members of the National Security Council were at the forum.

Attendees from media outfits like Bloomberg, The Economist and The Washington Post were rubbing elbows with political leaders such as rising Democratic Party personality Stacey Abrams and chiefs of international organizations like the U.N. cultural agency and animal rights group WWF.

Pompeo came to Switzerland from Germany as part of a four-country European tour dominated by increasing tensions between the U.S. and Iran. Pompeo is seeking to assure European leaders that despite U.S. intentions to step up economic pressure on Iran with sanctions, the U.S. is not seeking war with the Islamic Republic and may explore opening a channel of communications with Tehran.

Trump has openly signaled that he wants to talk to Iranian leaders and neutral Switzerland, which has long represented U.S. interests in Iran, could be a convenient emissary.

Pompeo will meet the Swiss foreign minister on Sunday, prompting speculation toward that end.

“I’m not going to talk about how we’re communicating or not communicating with (Iran),” Pompeo told reporters on his plane. Asked why he was spending three days in Bern — the Swiss capital that was last visited by a U.S. secretary of state more than two decades ago — he replied coyly only that he’s a “big cheese and chocolate fan.”

Before heading to Montreux, Pompeo visited the old city of Bern, touring the UNESCO World Heritage Site with his wife, Susan, U.S. Ambassador to Switzerland, Ed McMullen, a number of aides and a large security contingent.

The 40-minute stroll included stops at the historic 15th-century Bern Minster cathedral, walking by the apartment where Albert Einstein developed his Theory of Relativity while working at the Swiss patent office from 1903-1905, and seeing the city’s 13th-century Zytglogge, or “Time bell” clock tower, which is said to have inspired Einstein.