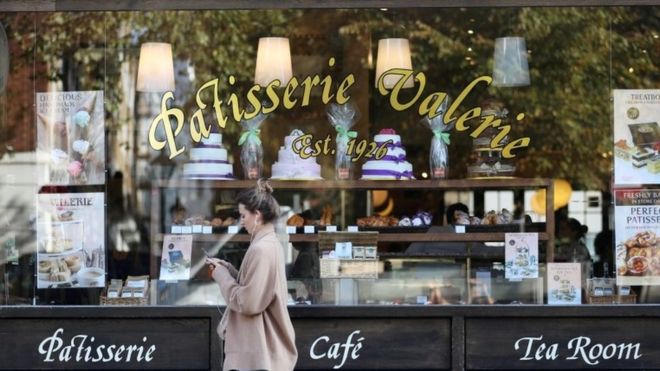 Cafe chain Patisserie Valerie has collapsed into administration after the failure of rescue talks with banks.

Administrators KPMG will close 70 outlets immediately, while the remaining 121 will continue trading in the hope of finding a buyer.

KPMG said there would be “significant” redundancies. The BBC understands up to 900 of the 3,000 staff may go.

The company said in a statement that it did not have enough money to meet its debts. The biggest shareholder and chairman, entrepreneur Luke Johnson, had been in talks to extend a cash lifeline from HSBC and Barclays.

Mr Johnson has personally extended an unsecured, interest-free loan of £3m to help ensure that the January wages are paid to all staff working in the business.

“This loan will also assist the administrators in trading as many profitable stores as possible while a sale process is undertaken,” the company said in a separate statement.

In addition to Patisserie Valerie, the company’s other brands include Druckers Vienna Patisserie, Philpotts, Baker & Spice and Flour Power City.

Finance director Chris Marsh was arrested after having been suspended by the company when the financial irregularities were uncovered.

KPMG’s administrators Blair Nimmo and David Costley-Wood said about 121 stores would continue to trade while a buyer is sought.

They said: “Our intention is to continue trading across the profitable stores, as collectively, the brands have a strong presence on the high street and have proven very popular with consumers. At the same time, we will be seeking a buyer for the business and are hopeful of a good level of interest.

“Unfortunately, however, we have had to take the difficult decision to close 70 stores resulting in a significant number of redundancies. We will be working with those affected employees, providing all support and assistance they need.”

Within hours of the administration announcement, closure notices began appearing in some outlets.

Last week, Patisserie Valerie confirmed it had found “extensive” misstatement of its accounts and “very significant manipulation of the balance sheet and profit and loss accounts”.

This includes thousands of false entries in its ledgers, the company said in a statement. Profits and cash flow had been overstated and were “materially below” figures announced in October.

Patisserie Valerie almost ceased trading last year after the discovery of the black hole in the accounts. However, a rescue plan was passed by shareholders in November, resulting in the issue of £15m worth of new shares.

“Any dim hope investors had of recovering any value from shares they bought in good faith has now been extinguished,” he said.

“It’s one thing to see a company’s shares wiped out by poor trading conditions, or even bad management decisions, it’s quite another to see your investment disappear as a result of fraudulent activity,” he added.

After previous corporate collapses, her committee began looking into the future of auditing in the UK. She said the Patisserie Valerie affair would form part of the inquiries.