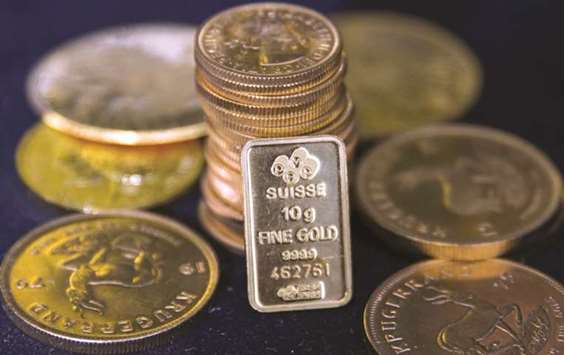 Investors stung by the sell-off in gold are going to need more than cheap equities and stabilising bullion prices to wade back into mining-company stocks.

Bullion has slipped 8.2% this year as a stronger dollar and expanding global economy diminished demand for the metal as a haven.

Miners have fared even worse, with the Philadelphia Stock Exchange Gold and Silver Index of 30 companies down about 23% in 2018.

Gold miners fell to the cheapest relative to the metal since 2016 this month. The industry is so out of favour that Vanguard Group has said it will change the name of its precious- metals fund and reduce the portion of its holdings within the sector.

While recent steadying in gold prices sparks hope the worst is over, companies presenting at a conference starting Sunday in Colorado could have a hard time persuading investors.
“There’s a lot of institutional interest on the sidelines, but at the moment, buying into this falling knife may be dangerous,” Ronald-Peter Stoeferle, a managing partner at Liechtenstein-based Incrementum AG, said by phone on Thursday. “Everybody hates gold, but people hate mining stocks more.”
Gold futures for December delivery slipped 0.8% on Friday to settle at $1,201.30 an ounce on the Comex in New York.

“You see a lot of stock prices below the 2015 lows – some are going back to 2008 lows,” Stephen Land, San Mateo, California-based portfolio manager at the Franklin Gold and Precious Metals Fund, said in an interview.

“A number of these valuations are factoring in a gold price lower than $1,200. If gold prices hold or move higher, they would have overshot on the downside.”

Over the past few years, miners have slashed costs, lowered debt and boosted productivity to lure buyers. Companies cut all- in sustaining cash costs to an average of $934 per ounce in the second quarter, down from $1,199 in the second quarter of 2013, according to data compiled by Bloomberg Intelligence. The costs are still lower than the current gold price, boosting the potential for profitability. Yet buyers haven’t been swayed.

Vanguard has said it’s making changes to its Vanguard Precious Metals and Mining Fund as part of an effort to “improve the consistency of its long-term performance.” The fund, which had invested at least 80% of its assets in the sector, will trim that to at least 25%.

It will be called the Global Capital Cycles Fund and also invest in infrastructure assets such as telecommunications and utilities.

At the time of the announcement, the fund was down about 11% this year and lost 2.2% annually over the past five years, according to data compiled by Bloomberg.

The return from miners has been so dismal that billionaire hedge-fund manager John Paulson has formed a coalition with 15 other investors aimed at curbing years of what his fund has called value destruction in the gold sector.

At the Denver Gold Forum, investors will be looking to major presenters including Barrick Gold Corp and AngloGold Ashanti to convey why gold is still relevant in an environment where the broader equity markets continue to make new highs and bond yields are climbing.
Hedge funds and speculators have added to the doldrums. Wagers on gold’s declines outnumbered bets on price gains by 74,390 futures and options contracts in the week ended September 18, according to US Commodity Futures Trading Commission data released on Friday. The net-short bets are close to a record seen earlier this month.

Gold-mining stocks have been beaten up enough, and the tide may be shifting, according to Tom Holl, who helps manage the BlackRock Gold and General Fund.

But gold prices holding near $1,200 since late August and eking out two small weekly gains in a row won’t win over sceptics, said Dan Denbow, a portfolio manager at USAA Precious Metals & Minerals Fund in San Antonio, which oversees $460mn.