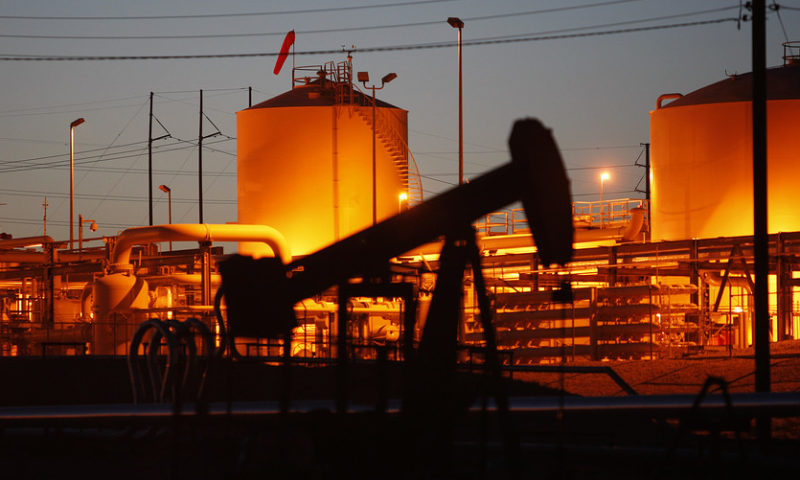 Oil futures posted a modest loss on Monday, finding some support from the threat of disruptions to supply from U.S. sanctions on Iranian oil, but also pressured by the potential for lower global demand on the heels of U.S.-China trade tensions.

October futures on West Texas Intermediate crude CLV8, -0.07% the U.S. benchmark, fell by 8 cents, or 0.1%, to settle at $68.91 a barrel on the New York Mercantile Exchange, after finishing last week with a gain of 1.8% for the most-active contract.

Market participants have been anticipating U.S. sanctions on Iran specifically targeting oil, which are due to come into force in early November after President Donald Trump’s decision in May to pull out of the nuclear agreement with Tehran. Sanctions against Iran, the third largest OPEC producer of oil, are expected to directly hurt its global crude exports.

Against that backdrop of sanctions on Iranian oil, U.S. Energy Secretary Rick Perry told reporters, at a meeting with Russian Energy Minister Alexander Novak in Moscow on Friday, that Saudi Arabia and Russia are among oil producers that are to be admired and appreciated for helping to make sure that the world does not see a spike in oil prices, Reuters reported Friday.

Crude-oil investors also eyed the threat of new U.S. tariffs on Chinese goods, which could hurt demand for oil.

The Trump administration is expected to impose $200 billion in tariffs on Chinese goods, which risks upending hope that the world’s largest economies could settle a tit-for-tat trade dispute amicably and assuage market fears that trade clashes could escalate into animosities intense enough to disrupt global economic health.

Meanwhile, a Reuters report, citing sources familiar with the matter, said that a meeting of the OPEC and non-OPEC Joint Technical Committee would be held Monday and that one big theme of the meeting is managing expected production increases after agreeing earlier this year to ease some curbs to output. The JTC monitors the level of compliance with the production-cut pact between the Organization of the Petroleum Exporting Countries and other major producers, including Russia.

The next meeting for the Joint Ministerial Monitoring Committee, which is tasked with ensuring that the objectives of the production-cut agreement implemented in January 2017 are met, is scheduled in Algiers for Sept. 23.

At its gathering in August, the JMMC, based on a report prepared by the JTC, said countries participating in the original output-cut pact fell to 109% in July, down from the committee’s reported compliance of 121% in June and 147% in May.

The aftermath of Hurricane Florence, which continues to douse the Carolinas with rain and has resulted in dangerous flooding, continues to have some influence in energy trading as well, even as the storm has been downgraded to a tropical depression.

S&P Global Platts reported Monday that no U.S. offshore oil production facilities or refineries were in the path of the storm, and two key gasoline pipelines in the region were operating normally as of Sunday.

U.S. oil production has been in the spotlight, with the Energy Information Administration recently estimating that the U.S. likely surpassed Russia and Saudi Arabia to become the world’s largest crude-oil producer earlier this year.

In a monthly report issued Monday, the EIA forecast a rise of 79,000 barrels a day in oil production from seven major U.S. shale oil plays to 7.59 million barrels a day in October, from a month earlier.