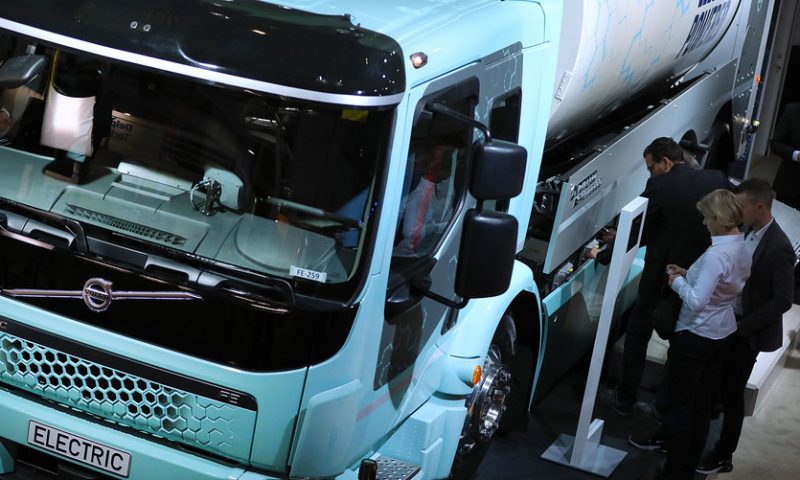 Companies will use Nvidia’s AI platforms for training, simulation, and in-vehicle computing

Nvidia Corp. is making a play for the multibillion-dollar, autonomous-truck market, joining forces with Volvo Group to go up against the likes of Tesla Inc., Alphabet Inc. and others that are developing the commercial vehicles of the future.

Nvidia NVDA, +5.41%  and Volvo’s VLVLY, +2.18% partnership would rely on Nvidia’s artificial-intelligence platforms for training, simulation, and in-vehicle computing to eventually get driverless commercial trucks on public roads and roadways, and the resulting system would be “scalable,” the companies said Tuesday.

The companies acknowledged the safety challenges related to driverless trucks and stopped short of disclosing goals and timelines, as well as figures related to their partnership. The agreement will span “several years,” they said, and work begins immediately involving Nvidia and Volvo employees in the U.S. and Sweden.

Commercial trucks are underused, and changing that would be one of the benefits of AI, Nvidia founder and CEO Jensen Huang said on a call following the announcement. Using AI would also increase trucking safety and create new business models for the new AI-powered and connected commercial trucks, he said.

Volvo already has driverless commercial vehicles working on specific tasks, such as at a limestone mine in Norway. The next step for the company — and one of the reasons for teaming up with Nvidia — is to take them to private roads and eventually elsewhere, Lars Stenqvist, Volvo’s chief technology officer, said on the call.

The autonomous trucks would at first be used in very specific situations, with safety in mind, he said. “Safety is in the DNA of the Volvo Group,” he said, so the company hasn’t set firm timelines yet, preferring to focus on the safety aspects.

Tesla TSLA, -0.13%  has been developing its own electric truck, which would come with Autopilot, Tesla’s suite of advanced driver-assistance systems. The truck, called the Semi, is expected to head into production toward the end of the year.

Stock-market investors haven’t been this bearish since the 2008 financial crisis, says Bank of America