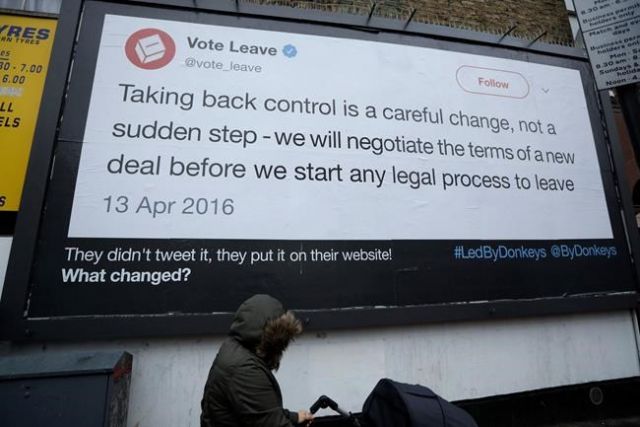 The British government has cancelled a contract to ship goods to the country after it leaves the European Union with a company that turned out to have no boats and no experience running a ferry service.

Authorities had been criticized for the 13.8 million pound ($18 million) deal with Seaborne Freight, part of plans to keep trade flowing if Britain leaves the EU without a divorce deal.

The U.K. Department for Transport said Saturday that it had ended the contract because an Irish firm that was backing Seaborne Freight, Arklow Shipping, had withdrawn its support.

The department said no taxpayer money had been transferred to the company. It said the government was “in advanced talks with a number of companies to secure additional freight capacity” if there is a no-deal Brexit.

Britain is due to leave the EU on March 29 but British lawmakers have not yet agreed upon a divorce deal outlining departure rules and future trade terms. A withdrawal agreement between British Prime Minister Theresa May’s Conservative government and the EU was rejected last month by Britain’s Parliament, and EU officials are resisting U.K. attempts to renegotiate it.

British businesses fear a no-deal Brexit will cause gridlock at ports by ripping up the trade rulebook and imposing tariffs, customs checks and other barriers between the U.K. and the EU, its biggest trading partner.

Guy Verhofstadt, the European Parliament’s chief Brexit official, said this week that a no-deal Brexit would be “a disaster on both sides of the Channel.” The 27 other EU nations, as well as Britain, have started hiring more customs officials and taking other steps to protect themselves against the worst effects of Brexit.

Seaborne had been contracted to provide services between Ramsgate in southeast England and the Belgian port of Ostend to ease pressure on the busiest cross-Channel route between Dover, England, and Calais, France.

Criticism of the deal increased when it was discovered that part of Seaborne’s website appeared to have been copied from a food delivery firm.

U.K. opposition Labour Party leader Jeremy Corbyn said May’s Conservative government claimed to have “‘looked very carefully’ at Seaborne Freight before giving the company the contract, but apparently not carefully enough to notice that it didn’t have any ships.”

Labour transport spokesman Andy McDonald accused Transport Secretary Chris Grayling of “heaping humiliation after humiliation on our country” and said he should resign. Grayling has also been in charge as British commuters have howled about deficiencies in the country’s train services.

‘We seized our island back from the navy’