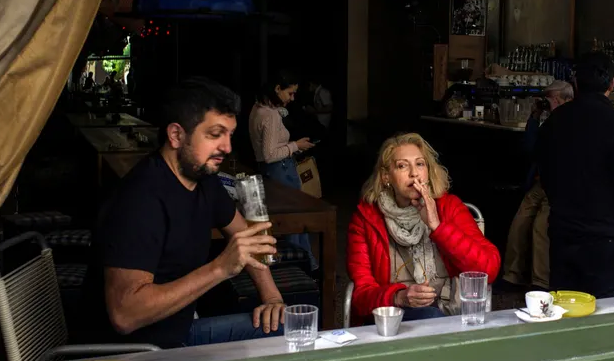 Until not so very long ago Greek MPs thought nothing of lighting up in the august halls of the Athens parliament.

So common was the habit that a thick fog of cigarette smoke often hovered over the building’s cafe, a few metres from the legislative chamber where deputies had once voted to ban smoking in all public spaces, including the 300-seat House.

Nine years, 10 months and 26 days after that ban came into effect, lawmakers are finally being forced to abide by it too.

“There’s definitely been a change,” said Dimitris Tarantsas, who has waited on MPs from behind the cafe’s bench-top bar for the past 18 years. “The law, for the first time, is being upheld.”

By Monday, he says, even the metal ashtrays still gracing the one place where smoking is allowed – a vestibule off the cafe – will have been relocated to the dustbin of history as the building officially becomes a smoke-free zone.

Less than a month after assuming power, Kyriakos Mitsotakis, Greece’s avid non-smoker premier, is determined to do what no other administration has managed so far: actually enforce the prohibition George Papandreou, his equally health-conscious predecessor, had sought to implement almost a decade ago. With 27% of the population lighting up every day, Greece still tops Eurostat’s league tables of smokers, even if rates are on the decline.

Calling the crackdown a priority for his centre-right government, Mitsotakis has used his first weeks in office to ram home the message that, from now on, MPs must lead by example. After parliament imposes its ban, ministries, hospitals, schools and other public services will follow suit.

“The enforcement of laws is an issue that applies to us all,” he told schoolchildren when the subject was raised during a visit to his official residence this week. “Of course the state is beholden to implement laws but they must reflect the maturity of a society itself and its desire to change.”

Few measures have been as controversial – or illustrated the innate anti-authoritarianism of Greeks – as much as official efforts to wean the nation off its nicotine addiction.

Not since Papandreou, a social democrat who presided over the country at the start of its debilitating debt crisis, has a leader placed as much emphasis on the need to stub out the habit.

“Kyriakos is a fanatic non-smoker, no one wants to be seen puffing around him,” confides one party insider. “It’s a priority for the government but its personal too.”

The 51-year-old prime minister will have his work cut out for him.

Almost from the day the blanket ban came into force, it has been flouted – despite a dramatic shift in attitudes towards tobacco by Greeks at both ends of the age spectrum.

Bars, restaurants and nightclubs have led the anti-legislation charge, with irate owners citing the country’s recession as a reason for putting ashtrays back on tables. Invariably it is non-smokers who are forced to sit outdoors to accommodate customers who want to puff inside.

In sharp contrast to other EU member states, Greece’s former leftist-led government brimmed with smokers who thought nothing of lighting up in public. Nonconformism assumed new heights when Pavlos Polakis, the country’s erstwhile deputy health minister, sat through a press conference chain-smoking to the fury of officials in Brussels.

But showing it means business, the new government announced on Friday that Panagiotis Behrakis, a prominent respiratory physiologist long at the forefront of global efforts to combat tobacco addition, would spearhead the anti-smoking drive.

“For the first time there is the political will to tackle the problem,” the ex-Harvard professor told the Guardian. “We have the support of public opinion. Repeated surveys have shown that about 76% of people are angry that the law has not yet been enforced.”

Although there has been improvement, with data showing that Greeks have increasingly dropped the habit, the country still had the worst record for passive smoking in the EU, he said.

“A lot has been done in schools to change attitudes,” adds Behrakis, who also heads the Joint Action on Tobacco Control in Europe. “There is nothing better than the brains of young boys and girls who more and more are encouraging their parents to give up.”

In the coming weeks, a new hotline will be established for violations to be reported by members of the public. As the crackdown intensifies, police will be actively enrolled.

Stiff penalties, foreseen in the original legislation, will also be enforced. “Fines range from €50 to €500 (£45 to £450) for offenders and, in the event of repeated violations, businesses will be closed,” says Behrakis. “Bars, restaurants and nightclubs are the biggest problem.”

But the professor also acknowledges that in the case of MPs, punishment may not be so easy.

“How we proceed there is a good question,” he quips. “They enjoy immunity from prosecution under the Greek constitution. It will be up to the president of the parliament to ensure the law isn’t broken.”