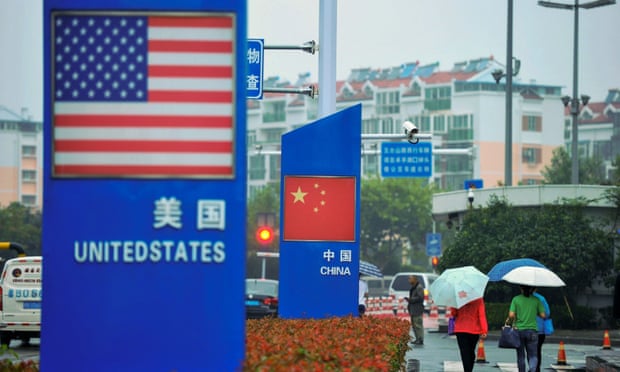 The United States and China have imposed new tit-for-tat tariffs against each other’s goods, the latest escalation in a heated trade war between the world’s two largest economies.

US tariffs on $200bn worth of Chinese goods and retaliatory tariffs by Beijing on $60bn worth of US products took effect at 0400 GMT. The two countries already exchanged tariffs on $50bn worth of each other’s goods earlier this year.

Soon after the tariffs went into effect, China issued a 36,000-word white paper accusing the US of “economic hegemony” that threatens the global multilateral trading system as well as Sino-US ties, according to Xinhua.

“[The US] has brazenly preached unilateralism, protectionism and economic hegemony, making false accusations against many countries and regions, particularly China, intimidating other countries through economic measures such as imposing tariffs, and attempting to impose its own interests on China through extreme pressure,” the white paper said.

Though a senior White House official last week said the United States would continue to engage China for a “positive way forward,” neither side has signalled a willingness to compromise.

The US official said on Friday there was no date set for the next round of talks. The Wall Street Journal reported China has cancelled upcoming trade discussions with the United States and will not send vice-premier Liu He to Washington this week.

Economists have warned that a protracted dispute will eventually stunt growth not just in the US and China but across the broader global economy. Worries about the confrontation have already rattled financial markets.

Chinese products hit with new duties include a range of consumer goods from vacuum cleaners and seafood to internet-connected devices. Previous tariffs targeted industrial goods and components. US goods targeted by Beijing include liquefied natural gas and certain types of aircraft.

The trade tensions have cast a pall over broader relations between Beijing and Washington, with the two sides butting heads on a growing number of issues.

On Saturday, China summoned the US ambassador in Beijing and postponed joint military talks in protest against a US decision to sanction a Chinese military agency and its director for buying Russian fighter jets and a surface-to-air missile system. China also recalled its naval chief from the US.

US lawmakers have called on their government to sanction Chinese officials involved in a counter-terrorism campaign in the western Chinese territory of Xinjiang, which rights activists say has led to widespread human rights abuses of Muslim minorities.

Rob Carnell, chief Asia economist at ING, said in a note to clients that in the absence of any incentives Beijing would likely hold off on any further negotiations for now.

“It would look weak both to the US and at home,” he said, adding that there is “sufficient stimulus in the pipeline” to limit the damage of the latest tariffs on China’s growth.

“The US-China trade war has no clear end in sight.”

President Donald Trump on Saturday reiterated a threat to impose further tariffs on Chinese goods should Beijing retaliate, in line with his previous comments signalling that Washington may move to impose tariffs on virtually all imported Chinese goods if the administration does not get its way.

China imports far less from the United States, making a dollar-for-dollar match on any new US tariffs impossible.

Instead, it has warned of “qualitative” measures to retaliate. Though Beijing has not revealed what such steps might be, business executives and analysts say China could withhold exports of certain products to the US or create more administrative red tape for American companies.

‘Things are getting worse’: economic collapse looms again in Zimbabwe