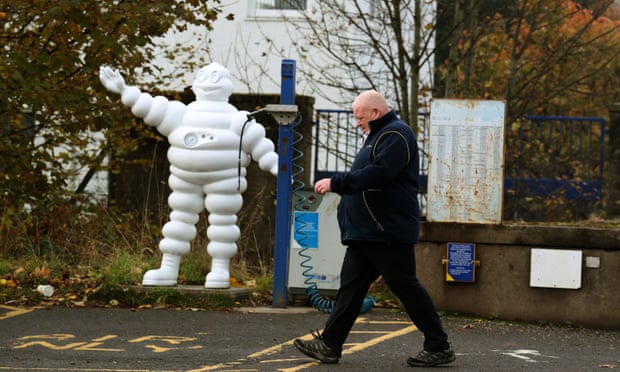 Michelin and Schaeffler to close UK plants with 1,400 jobs at risk

More than 1,400 British jobs are at risk after two European suppliers of car parts, Schaeffler and Michelin, announced plans to close UK factories in a blow to the wider automotive industry ahead of Brexit.

Schaeffler, the German car parts supplier, said uncertainty surrounding Brexit had contributed to its decision to close two UK factories, in Llanelli, Wales, and Plymouth, where 570 people are employed. The company said the closures would take place over the next two years.

French tyremaker Michelin announced plans to close its factory in Dundee in 2020, nearly 50 years after it opened and where 845 people are employed. It blamed dwindling demand for smaller tyres. It said the decision was unrelated to the Brexit vote.

At Schaeffler’s plant in Plymouth, a workforce of 350 people makes bearings and machine parts for the firm’s industrial division as well as the aerospace and defence industries.

At Llanelli, about 220 people are employed to make mechanical parts and bearings for the major car manufacturers and other industrial suppliers. The company said it would relocate production from the two UK factories to existing plants in the US, China, South Korea and Germany.

The union Unite said it would “fight for every job” as it tries to avert the closures.

Tony Burke, assistant general secretary, said: “This is yet another body blow for the UK’s automotive supply chain and the wider car industry. It should leave no one in any doubt as to what is in store if the UK crashes out of the European Union without a deal that secures tariff-free frictionless trade.

“The uncertainty surrounding the Tories’ shambolic handling of Brexit and their piecemeal industrial strategy is having real consequences. Behind the closures and the uncertainty currently gripping the car industry and component manufacturing are people with bills to pay and families to feed.”

The wider UK car industry has repeatedly urged the government to make frictionless trade a priority in Brexit negotiations or risk the loss of thousands of UK jobs.

Schaeffler currently employs more than 1,000 people in the UK and said its factory in Sheffield would remain open, while operations at its two logistics centres in Sutton Coldfield and Hereford would be combined in Hereford.

Michelin said it was no longer financially viable to keep its Dundee factory open because of a fall in demand for premium tyres of 16-inches and smaller, which are made at the site. It also blamed a shift in that market to low-cost versions made in Asia.

John Reid, factory manager at Michelin Dundee, said: “I understand that these proposals will come as a huge blow to our employees and to the city of Dundee as a whole. It’s also a very personal blow for me.

“This factory has faced incredibly tough challenges before and we have come through thanks to the hard work and flexibility of our people and the union, and the backing of the Michelin group. However, the market for the smaller tyres we make has changed dramatically and permanently, and the company has to address these structural changes.”