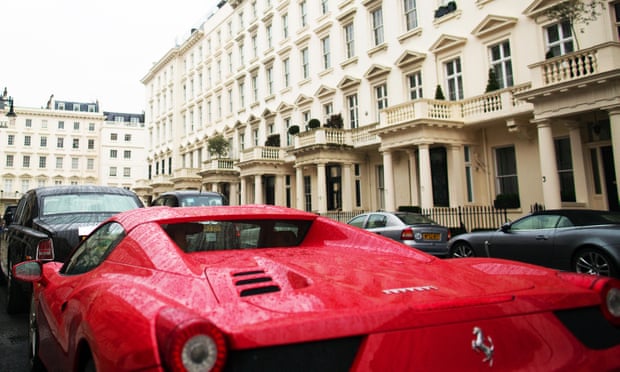 Number rises by 3,700 but many are foreign or non-doms who could leave after Brexit

The number of people in the UK earning more than £1m a year has jumped to over 18,700, with more than one in 10 of them living in Kensington and Chelsea, according to figures released by HM Revenue & Customs.

The total increased by 3,700 in the latest available tax year, but there are concerns that many of the “highly mobile” high-earners could quit the UK in the wake of a messy Brexit.

More than a third of all the £1m earners live in London, with more than 2,000 in Kensington and Chelsea, and 1,400 in the City of Westminster in the 2015-16 tax year. That’s according to HMRC figures obtained by the law firm Wilsons under freedom of information laws. The 2015-16 are the latest figures available.

Wilsons’ analysis suggests that many of the £1m-plus earners are wealthy foreign executives, investors or non-doms who are domiciled overseas for tax purposes. They could leave the UK if immigration rules or taxes are tightened in the wake of Brexit.

Tim Fullerlove, a partner at Wilsons, said: “London is still an attractive prospect for the wealthy, but a more welcoming culture in UK policies could help to retain its appeal.

“Wealthy business executives, investors and non-doms from overseas are a boon for the UK economy, paying large amounts of taxes in the capital and generating jobs. Many high earners regard the UK as one of the most secure countries in which to hold their assets.

“There is now a danger, however, that what some commentators are calling the ‘golden goose’ of wealthy investors is being taken for granted.

“There could be a risk of losing non-doms to other jurisdictions if UK tax reliefs are not attractive to them. There are also concerns that visa rules could be tightened after Brexit, shutting off investors from overseas.”

Non-dom status has been repeatedly criticised, for allowing some of the world’s wealthiest individuals to live in Britain for years without paying UK tax on foreign income. Some non-doms have passed the status down between generations, dramatically cutting their tax bills.

In 2015, the then-chancellor George Osborne announced a partial clampdown on the practice, hitting non-doms who were born in the UK or had lived in the country for more than 15 of the last 20 years.