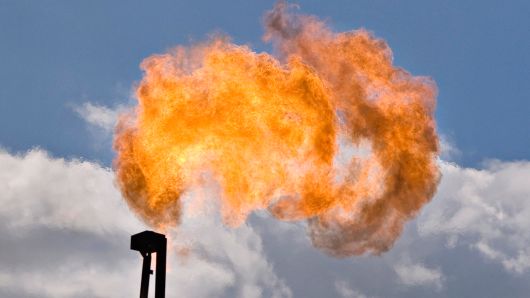 The United States is in the middle of a traditionally weak period for natural gas demand, and production is booming, yet prices for the fossil fuel are rocketing to the highest level since January.

The country is heading into the winter with natural gas stockpiles at their lowest in at least a decade, according to the commodities research group at Barclays. At the same time, power plants are grappling with a hotter-than-usual autumn that is keeping air conditioners running. Add a series of nuclear power plant outages to the mix, and you’ve got a recipe for a rally.

Natural gas prices are up about 12 percent over the last month to roughly $3.16 per million British thermal unit. On Wednesday, they hit a more-than-seven-month high, at $3.26 per mmBtu.

Prices backed down 2 percent on Thursday after government data showed a weekly increase of 98 billion cubic feet in U.S. natural gas stockpiles. However, prices are still near their highest since the dead of last winter. 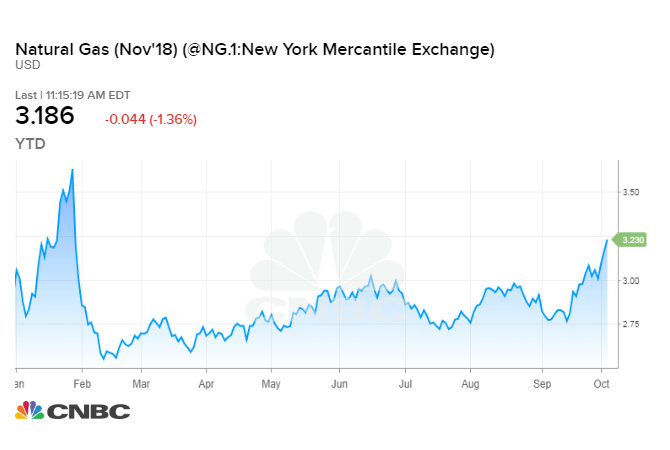 Barclays expects prices to ease, but the bank warns that heading into the winter with so little gas in storage leaves the market susceptible to price spikes.

“If winter weather comes in mild, then this current storage shortfall is a speed bump on the way to a looser market in 2019. If cold weather comes to fruition, though, the tenor of the 2019 outlook is fundamentally changed and the market will spend a good portion of next year just digging out of the storage deficit,” Michael Cohen, head of energy markets research at Barclays, wrote in a research note on Thursday.

The bank’s weather outlook calls for natural gas prices to average $2.99 per mmBtu this winter, but if temperatures are 10 percent colder than anticipated, that estimate shoots up to $3.65 per mmBtu.

Barclay’s view that natural gas prices will moderate speaks to the roots of the rally. While low stockpiles provide a bearish backdrop, it’s largely the unseasonably warm weather and unplanned nuclear power outages that are to blame.

Cooling degree days, or days that were warm enough to require air-conditioning, were 20 percent higher in September than the 10-year average, according to Barclays. Meanwhile, Hurricane Florence forced power plants in the Carolinas region to shut down as much as 17 gigawatts of nuclear power, or about 10 gigawatts more than usual over the last four years.

While those issues will soon pass, Barclays warns that a tug of war between market forces will determine how skinny natural gas supplies get — and how high prices rise — this winter.

On the one hand, U.S. natural gas production is rising at a record-breaking pace of about 9 billion cubic feet per day. But gas demand for power generation is also at a record. Three new U.S. liquefied natural gas export facilities are scheduled to open through the first quarter of 2019, gas-consuming industrial projects are coming online and new connections are slated to deliver U.S. supplies to Mexican power plants.

“These offsetting factors point to a gas market that will balance on a knife’s edge this winter, with little spare room on either side,” according to Cohen.

“The bottom line is that this winter is set up to be volatile, no matter the weather,” Cohen said.

Wind Farms May Actually Warm the US, Controversial Study Finds