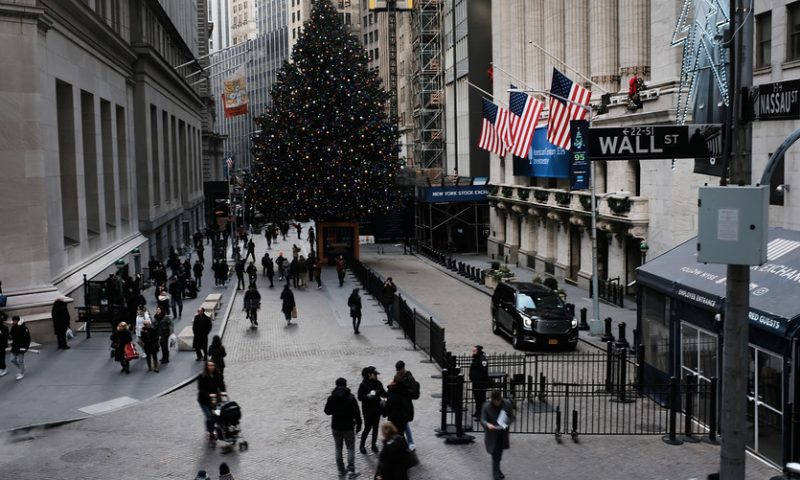 U.S. stocks closed mixed on Tuesday as only the Nasdaq managed to post a record-high close in what ended up a subdued trading session on Christmas Eve (in sharp contrast to a year ago today).

Equity markets finished trading for Tuesday’s session at 1 p.m. Eastern time, while the bond market is set to finish an hour later, at 2 p.m., with many global markets closed on Wednesday.

Reflecting progress toward a January trade agreement between the U.S. and China, Beijing said Monday that it would cut tariffs on some 850 products and markets remained hopeful a deal will be signed in January. President Donald Trump said he and China’s leader, Xi Jinping, would hold a signing ceremony for the so-called Phase 1 deal when they met.

But a potential holiday flashpoint for markets could be North Korea’s promise earlier this month to deliver a “Christmas gift” unless Washington abides by an end-of-year deadline set by Pyongyang for concessions in exchange for a possible deal to curb its nuclear-weapons program.

Trump is working to persuade North Korea to return to denuclearization talks, but North Korea’s Kim Jong Un has shown few signs of willingness to return to the negotiating table, according to Politico.

However, China, Japan and South Korea have agreed to work together to promote dialogue between the United States and North Korea, South Korean President Moon Jae-in said on Tuesday following a summit among the three countries in China, according to Reuters.

Boeing remained in the spotlight for investors after the resignation of Dennis Muilenburg as CEO and president on Monday on the heels of 737 Maz jetliner grounding earlier this year.

“Markets officially entered [the] holiday as trading volumes remain very thin and as Wall Street prepares to take the rest of the week off,” wrote Edward Moya, senior market analyst at Oanda, in a Tuesday research note.

Shares of Boeing BA, -1.35% were down 1.2% Tuesday after the aviation and defense contractor tapped Chairman David Calhoun as its chief executive and president, replacing Dennis Muilenburg, who has resigned.

The yield on the 10-year U.S. Treasury note TMUBMUSD10Y, -1.40% fell 2 basis points to 1.91% after a well-received auction for government paper in the morning.

The U.S. dollar edged higher relative to a basket of its rivals, with the ICE Dollar index DXY, -0.08% , a measure of the buck against six rival currencies, up less than 0.1%.

‘Watch gold in 2020,’ says one of Wall Street’s most influential stock-market investors