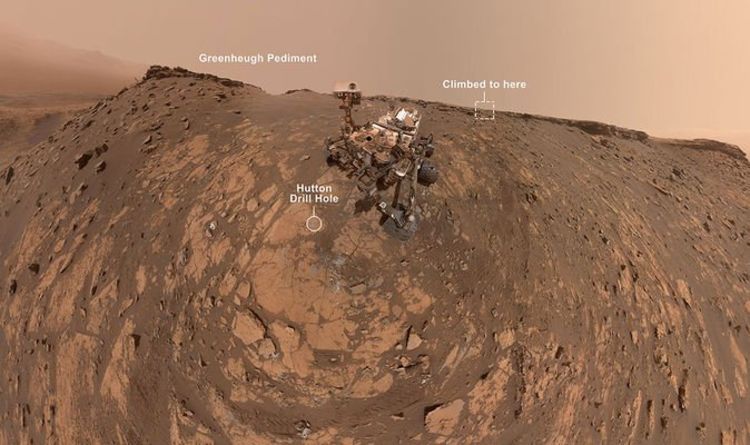 NASA’s plucky Mars rover has just finished a steep trek up the Greenheugh Pediment, a large sheet of jagged rock on top of a Martian hill. Just before Curiosity climbed the Martian rock, the car-sized rover took a 360-degree selfie.

The selfie was stitched together from a total of 86 images beamed back to Earth from Mars.

You can see just behind rover the “crumbling rock layer” of the Greenheugh Pediment.

Further back in the background is the high point the rover reached this month.

NASA said: “In front of the rover is a hole it drilled while sampling a bedrock target called ‘Hutton’.

“The entire selfie is a 360-degree panorama stitched together from 86 images related to Earth.

“The selfie captures the rover about 11 feet (3.4m) below the point where it climbed onto the crumbling pediment.”

Curiosity completed the climb on March 6 or the 2,696th Martian day of its mission.

Since 2014, Curiosity has been based around Mount Sharp, a three mile (five kilometres) mountain at the centre of Gale Crater.

Gale Crater is believed to be the site of an ancient Martian lake where life could have once existed.

NASA’s rover is drilling out and analysing rock samples in the region in search of ancient biological material.

Before the Red Planet dried up, scientists believe Mars resembled a young Earth with a hot, dense and humid atmosphere.

NASA said: “On Earth, all forms of life need water to survive. It is likely, though not certain, that if life ever evolved on Mars, it did so in the presence of a long-standing supply of water.”

How does the Curiosity rover take its selfies?

The NASA robot is armed with a robotic arm or ‘selfie stick’ of sorts, which it uses to photograph Mars’ alien features.

Attached to the robotic arm is the Mars Hand Lens Camera or MAHLI, which Curiosity uses to take up-close snapshots of Martian rock and sand.

But the rover can use the camera to photograph Martian landscapes and selfies by swinging it around on its arm.

However, because the camera can only photograph small areas at once, the rover has to take multiple snapshots in a series.

The pictures are then stitched together into a single image such as the one above.

The same process is applied to the Master Camera or MastCam, a twin mounted camera on the rover’s head.

NASA said: “The Mastcam can be used to study the Martian landscape, rocks, and soils; to view weather phenomena; and to support the driving and sampling operations of the rover.”

There is a second camera mounted on the rover, the black-and-white Navigations Camera.

Where Does The Market Go From Here? Keep An Eye On This Crucial S&P 500 Level