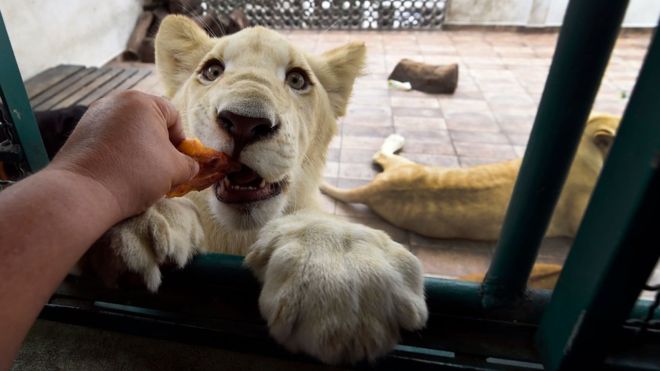 A man in Mexico City is refusing to give up the three lions he keeps on his terrace.

Federal inspectors say the trio should be moved into more appropriate care.

Their roars have caused concern in the highly built-up area, according to local media, and neighbours have voiced their complaints on social media.

Omar Rodríguez says he keeps them because he wants his grandchildren to get to know the endangered white species, says El Universal newspaper.

“I know that maybe these are not the best conditions,” Mr Rodríguez told AFP news agency. “The best condition for having a lion would be on the African savannah, where it could run freely, but you know…”

He says he has kept lions for 20 years and he has appropriate paperwork from the Profepa federal environment agency.

However, the authorities say he has not provided this, and the animals’ living conditions are not suitable.

Mr Rodríguez has been told to allow inspectors to visit his home in the Colonia Asturias area on Friday, or the case may be referred up to the attorney-general’s office. He has also been asked to provide documentation on the lions’ origins.

Concern was heightened after a man was attacked by a pet lion in Ciudad Juárez in the country’s north on Sunday.

The Milenio news site said its owner had come home drunk and was shouting at the animal.

The lioness reportedly retaliated, causing bite wounds up to 10cm (4in) deep.

Are there too many people on our planet?

Italy’s PM Visits Ethiopia and Then Eritrea to Support Peace