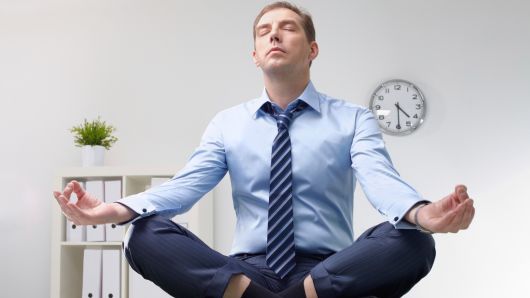 A team of scientists at biotech company Genentech started using a meditation app in 2015 and, not long after, noticed that they felt more content and happier at home and work.

After conducting their own experiments and submitting the data to human resources, Genentech decided to roll the Headspace app out to all of its roughly 14,000 employees the following year, said Nancy Vitale, senior vice president of human resources at Genentech, a unit of Roche.

“Headspace is giving us an opportunity to focus on the health and well-being of our employees,” she said. “Our mission is bringing breakthrough medicines to patients, and it’s critical to foster an environment where employees feel they can give their best.”

Headspace has spent the past year aggressively chasing corporate clients like Genentech and already has 250 companies that cover the cost of their employees’ subscriptions. Executives say they expect to double that number by the end of the year, said Chief Business Officer Ross Hoffman.

Corporate clients give it access to thousands of new customers, slashing the cost of acquiring new ones.

For employers, it gives them a way to help ensure their employees mental health. Quantifying how much stress and mental illness costs companies is challenging because it includes direct costs like medical visits and indirect costs, such as lost productivity.

More than half of working adults said they experienced a great deal or some stress at work in the past year, according to a 2016 study by Harvard’s T.H. Chan School of Public Health and other researchers. Meanwhile, about 8 percent of Americans reported meditating in 2012, according to the National Health Interview Survey by the Centers for Disease Control and Prevention.

Workers, especially millennials, are demanding more wellness benefits from their employers. Buying meditation subscriptions can be an attractive opportunity for companies — and a promising avenue for Headspace and competitors.

“You spend so much time working, that’s why it’s such a future vision of our company,” Headspace’s Hoffman said.

Premium memberships typically cost $12.99 per month, $95.88 per year or $399.99 for a lifetime. Headspace currently has more more than 31 million users on its platform and more than 1 million premium members. Headspace started courting companies about three years ago, Hoffman said, but it started really making a push for corporate clients last year. He joined the Santa Monica, California-based company last June and formed a team to focus on corporate clients.

Tech companies, like Google and LinkedIn, were early adopters. Headspace has also signed deals with more traditional employers and sprawling conglomerates like General Electric and Unilever.

Headspace declined to say what percent of its revenue comes from its Headspace for Work business. A spokesman said the company anticipates the business will represent around 50 percent of its annual revenue, “in the coming years,” making it equivalent to its consumer business.

Vitale notes this is just one tool Genentech uses to help employees with their mental health. At GE, Headspace is one component of the company’s focus on mindfulness this year.

Employees can access an enhanced one-month free trial and a roughly 60 percent discount off the standard rate. The company has received “great feedback” from “many” of the more than 5,000 employees that have tried it, Global Wellness Leader Adam Malinoski said.

But not every employer is sold quite yet. Some companies have asked Headspace for more proof that paying for the service will help their employees, or more data supporting the return on investment.

To address this, Headspace is conducting studies to see whether using the app can make employees healthier, workplaces safer and companies’ medical costs lower — the “holy grail of ROI” as Chief Scientific Officer Dr. Megan Jones Bell calls it.

“Your mind feels intangible in a way,” Bell said. “Where we’re pioneering is we’re trying to do studies to help us understand how meditation works to change your health and to push the edges of where science has been.”

One of Headspace’s competitors, Calm, is also eyeing corporate clients. It’s already signed a deal with professional services firm PricewaterhouseCoopers to give employees premium memberships as part of the firm’s wellness initiative, “Be well, work well.”