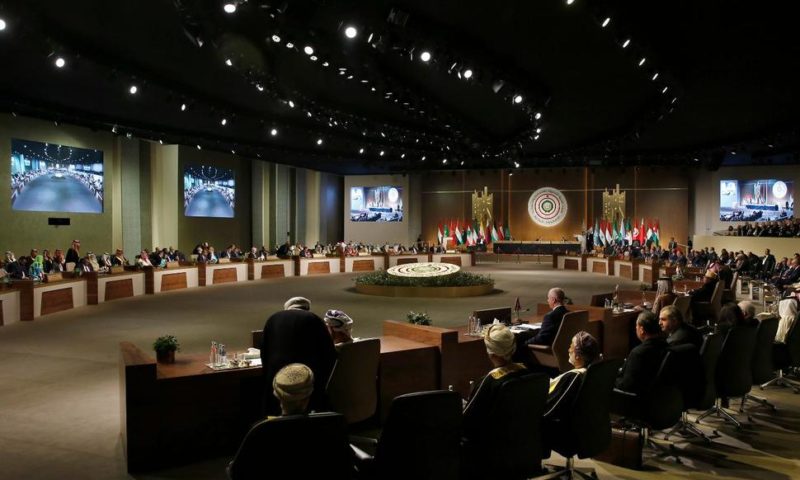 Lebanon is using an Arab economic summit to call for the return of Syrian refugees to safe areas of their war-torn country, where the nearly eight-year civil war is still underway despite a recent series of government victories.

BEIRUT — LEBANON used an Arab economic summit on Sunday to call for the return of Syrian refugees to safe areas of their war-torn country, where the nearly eight-year civil war is still underway despite a recent series of government victories.

President Michel Aoun told the opening session that Lebanon is overwhelmed by the presence of Syrian and Palestinian refugees, who make up about half the population of the tiny country, which is struggling with an economic crisis.

The meeting is the first economic and development summit to be held since 2013, and comes as Syria, Yemen and Libya remain gripped by violence and Iraq confronts a massive reconstruction challenge after its costly victory over the Islamic State group.

Qatar’s ruler attended the summit, which has been marred by divisions over readmitting Syria to the Arab League. But Sheikh Tamim bin Hamad Al Thani arrived shortly before the summit and left shortly after it began.

Qatar has been one of the main backers of Syrian insurgents trying to overthrow President Bashar Assad.

The United Arab Emirates and Bahrain have reopened their embassies in Damascus, and the visit by Qatar’s ruler is widely seen as a first step to restoring relations with Syria.

As the summit was ongoing in Beirut, Syrian state media reported that the country’s air defense units repelled an Israeli airstrike near the Damascus International Airport. Such attacks have usually occurred at night but Sunday’s air raid happened during daylight hours.

Sheikh Tamim and the president of Mauritania were the only heads of state from the 22-member Arab League who came to Beirut to attend the summit. Other countries sent lower-level delegations.

The other leaders’ absence appeared to be a snub to Lebanon, where groups led by the Iranian-backed Hezbollah had insisted that Assad should be invited.

“We regret the absences of some brotherly kings and presidents who have their justified excuses,” Aoun said without elaborating.

“We call for a safe return of Syrian refugees to their country, especially to stable areas that can be reached and areas of low levels of violence,” Aoun said in his opening address. “This should not be linked to reaching a political solution.”

Lebanon’s Foreign Minister Gebran Bassil read out the summit’s final communique which focused mostly on refugees. Syria’s conflict has led to the displacement of half the country’s population and created more than 5 million refugees, who fled mostly to neighboring Lebanon, Jordan and Turkey.

The statement called on the international community to “boost circumstances” that would allow the refugees to return to their home country, such as helping host countries as well as investing in the refugees’ homelands.

“They should also give aid to refugees and the displaced in their countries to encourage them to return,” said the final communique.

Lebanon is home to some 1 million Syrian refugees, a quarter of the country’s population.