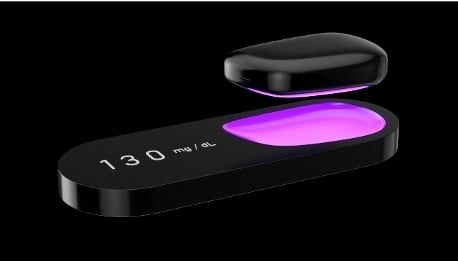 After decades of requiring diabetes patients to perform routine fingersticks throughout the day or be implanted with a sensor—or both—to keep track of their blood glucose levels, the current holy grail of medtech is the creation of a completely non-invasive glucose monitor.

A handful of companies have already joined this quest. Know Labs, for one, debuted this week its second device that can measure glucose levels from outside the body, without requiring lancets, test strips, implants or any other additional components besides an accompanying smartphone app.

The KnowU device, small enough to fit easily in the user’s pocket, is designed for on-demand use. It consists of a battery-powered, sensor-equipped monitor to perform the measurements and a base that charges the monitor and displays its calculated readings.

The hand-held device joins the previously unveiled UBand, which is worn around the wrist for continuous glucose monitoring. Both devices connect wirelessly via Bluetooth to the Know Labs smartphone app, which will track and store glucose readings.

Know Labs’ glucose monitors are both powered by its Body-Radio Frequency Identification, or Bio-RFID, technology. The Bio-RFID sensors emit radio waves to measure specific molecular signatures in the blood through the skin, calculated using spectroscopy.

“We know that not all people with diabetes are looking for a wearable continuous glucose monitoring device to manage their diabetes. Some simply want to replace the painful, inconvenient and expensive fingersticks they currently rely on,” said CEO Phil Bosua, who invented the Bio-RFID technology. “The Bio-RFID sensor we currently use for our internal product testing fits in your pocket and is ready for final use, so we decided to create the KnowU as a portable, affordable and convenient alternative requiring no disposable items, such as test strips and lancets.”

In vitro tests have found that the radiofrequency sensor technology was able to measure glucose levels with accuracy comparable to that of Abbott’s Freestyle Libre continuous glucose monitor, which uses a sensor attached to the back of the arm for up to two weeks at a time. According to a 2018 study (PDF) comparing the two, 97% of the UBand’s readings were within 15% of the values calculated by Abbott’s device.

Know Labs is now planning on performing human clinical trials of its Bio-RFID technology to support its regulatory submissions for the UBand, and then the KnowU. The Seattle-based company said it expects to begin the FDA pre-approval process for the KnowU monitor sometime next year.

That process won’t slow down Know Labs’ efforts to commercialize the UBand, which have already begun, according to founder Ron Erickson. The KnowU not only uses the same technology as the wearable model but is also “faster to build and commercialize, therefore accelerating our time to launch,” Erickson explained.

Among the tech companies also hoping to develop a totally noninvasive method for tracking glucose levels is Apple, which has long been rumored to be working on adding glucose monitoring capabilities to its ubiquitous wearable. The Big Tech’s dream may be closer than ever, now that partner Rockley Photonics has built a wearable biosensor able to continuously measure a clinic’s worth of biomarkers, from blood pressure to, yes, glucose levels.

On a smaller scale, Hagar is also currently building a sensor that, like Know Labs’, uses radio waves to pick up on glucose levels in the blood. The Israeli startup recently raised $11 million to keep developing the noninvasive tech and says its sensor has been proven to measure blood sugar with at least 90% accuracy, compared to the estimated 70% achieved by other CGMs.