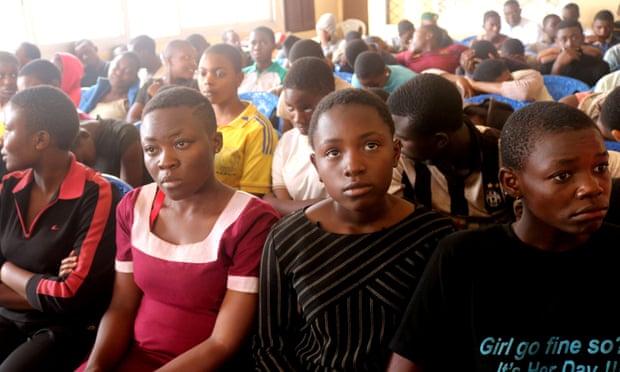 Dozens of students who were freed from kidnappers only to be put under effective “school arrest” by the Cameroonian government have been reunited with their parents.

The governor of the north-west region had insisted lessons go on after their capture, and security personnel were deployed to Nkwen Presbyterian secondary school in Bamenda, stopping parents from removing their children on Thursday.

After lobbying from angry and upset parents, and a gun battle that broke out outside their classrooms, the children were allowed home.

One father had been told he would not be allowed to remove his children and was talking to them about it when the gunfight broke out.

“As I was discussing with my children, that is when they started shooting. For about six to 10 minutes, we were afraid of the gunshots,” said Mr Gemuh.

The exchange of gunfire was apparently between the military and separatists from the English-speaking regions.

In interviews with the Guardian, some of the children said they were certain their kidnappers had been the Amba boys separatists, who have tried to enforce a boycott of schools in the anglophone regions.

Both Cameroonian forces and separatists have been accused of grave abuses in the conflict, which began as a plea for English-speaking officials to be appointed to the regions’ schools and courts, but escalated into a full-blown rebellion after the government killed peaceful protesters.

One student said there were about 50 kidnappers, who made them walk through the night. “I was very afraid. We kept walking and walking, our legs were paining,” they said. “We didn’t know if they would kill us or not. The ‘boys’ said their only problem is that we were in school. They said that they don’t want school.”

Another, who said they had been blindfolded and had their hands tied, said: “They forced us to record a video, saying police kidnapped us. We did.”

Some said their kidnappers spoke Pidgin English, an indication that they might be from the anglophone regions, while others said they wore military-style boots.

Two girls are still missing, as well as the school principal and a teacher.

One abductee said: “They asked those whose parents work with the government to [stand] up. Then they took two girls and the teachers and drove away with them.”

Some parents forced their way on to campus on Thursday morning, threatening to take the school and the head of the Presbyterian church that runs it to court if they did not release their children.

The school’s vice-principal and security guards have been in police custody since the kidnapping.