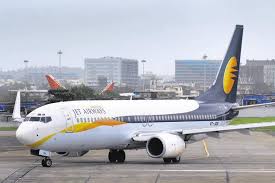 More than 30 Indian passengers, some bleeding from their noses and ears, have received treatment after pilots “forgot” to turn on a switch regulating cabin pressure, officials said.

Jet Airways flight 9W 697 from Mumbai to Jaipur turned back shortly after take off.

Videos tweeted by passengers aboard the plane showed oxygen masks deployed inside the aircraft.

The Boeing 737, which was carrying 166 passengers, landed safely.

The aviation ministry said the cockpit crew had been taken off duty pending an investigation.

Lalit Gupta, a senior official of India’s aviation regulator, the Directorate General of Civil Aviation (DGCA), told the Hindustan Times newspaper that the crew had forgotten to select a switch to maintain cabin pressure.

Jet Airways said in a statement that Thursday morning’s flight had turned back “due to loss in cabin pressure” and “regretted” the inconvenience caused to its passengers.

“The B737 aircraft, with 166 guests and 5 crew landed normally in Mumbai. All guests were deplaned safely and taken to the terminal. First aid was administered to few guests who complained of ear pain, bleeding nose etc,” the statement said.

The airline said it was co-operating fully with the DGCA investigation.

Passenger Darshak Hathi tweeted a video of the interior of the cabin as air pressure dropped and oxygen masks came down.

Another passenger Satish Nair tweeted a picture of himself bleeding from the nose, and complained that “the safety of passengers had been completely ignored” by the airline.

In January, Jet Airways grounded two pilots following reports of a fight inside the cockpit of a flight from London to Mumbai. The flight, which was carrying 324 passengers, had landed safely.

US ‘ready to restart negotiations’ with North Korea