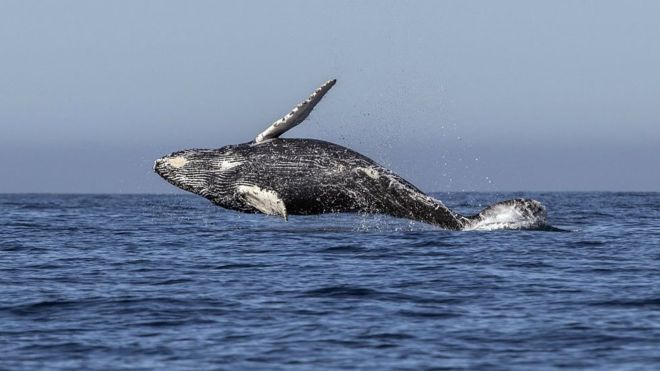 The government told its MPs of the decision, NHK reports. There has been no official confirmation of the move.

Commercial whaling was banned by the IWC in 1986 after some whales were driven almost to extinction.

For many years Japan has hunted whales for what it calls “scientific research” and to sell the meat, a programme widely criticised by conservationists.

The Japanese government is expected to cite the recovery of certain whale species as justification for the move, although it’s thought to be considering whaling only in its own waters.

Officials in Japan say eating whales is part of its culture.

A number of coastal communities in Japan have hunted whales for centuries, but consumption in the country surged only after World War Two when whales were the main source of meat. It has plummeted in recent decades.

Despite Japanese media widely reporting the decision has been taken, there has been no official announcement yet.

Hideki Moronuki, from the Fisheries Agency of Japan, told the BBC that Japan was considering every possible option but has “not yet come up with a decision”.

In September Tokyo tried to get the IWC to allow commercial catch quotas but the proposal was rejected.

What is the current whaling ban?

In 1986, IWC members agreed to a moratorium on hunting to allow whale stocks to recover.

Pro-whaling nations expected the moratorium to be temporary, until consensus could be reached on sustainable catch quotas.

It means that whales can be taken for scientific studies and the meat can later be sold for consumption.

Japan has caught between about 200 and 1,200 whales each year, saying it is investigating stock levels to see whether the whales are endangered or not.

Why can’t the IWC agree?

Japan has repeatedly tried to overturn the moratorium and secure agreement on sustainable catch quotas.

The last attempt to do so came in September at an IWC summit in Brazil.

Japan offered a package of measures, including setting up a Sustainable Whaling Committee and sustainable catch limits “for abundant whale stocks/species”.

The proposal was voted down. Since then there has been talk of the country simply leaving the body so it will no longer be bound by its rules.