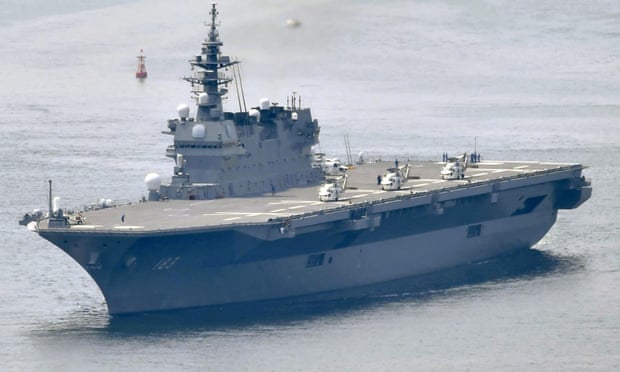 Japan is to acquire at least one aircraft carrier for the first time since the second world war, as it attempts to counter Chinese maritime expansion in the Pacific ocean.

The government will upgrade its two existing Izumo-class helicopter carriers so they can transport and launch fighter jets, according to media reports. The plans are expected to be included in new defence guidelines due to be released next month.

This week the Nikkei business paper reported that Japan was poised to buy 100 F-35 stealth jets from the US at a cost of more than US$8.8bn, a year after Donald Trump urged Tokyo to buy more US-made military equipment.

The reported order is in addition to 42 F-35 jets it has already bought from the US.

By refitting its two 248-metre-long Izumo-class vessels, which can each carry up to 14 helicopters, Japan would in effect be acquiring its first aircraft carriers since the end of the war – a move critics say violates its postwar constitutional commitment to a purely defensive role for the military.

Previous Japanese governments have ruled out acquiring aircraft carriers, adhering to the postwar consensus that the vessels’ capabilities could be interpreted as offensive, in a possible violation of the country’s “pacifist” constitution.

In its latest defence white paper, Japan noted that China had acquired and built aircraft carriers to enable it to expand into Pacific waters near Japan’s outlying south-western islands.

Increased Chinese naval activity in waters far from its shores has added to bilateral tensions over the Senkakus, uninhabited islets in the East China Sea that are administered by Japan but claimed by China, where they are known as the Diaoyu.

“It’s desirable that the Izumo can be used for multiple purposes,” the defence minister, Takeshi Iwaya, told reporters this week.

The carriers will be deployed to defend Japan’s remote south-western islands, according to the Mainichi Shimbun.