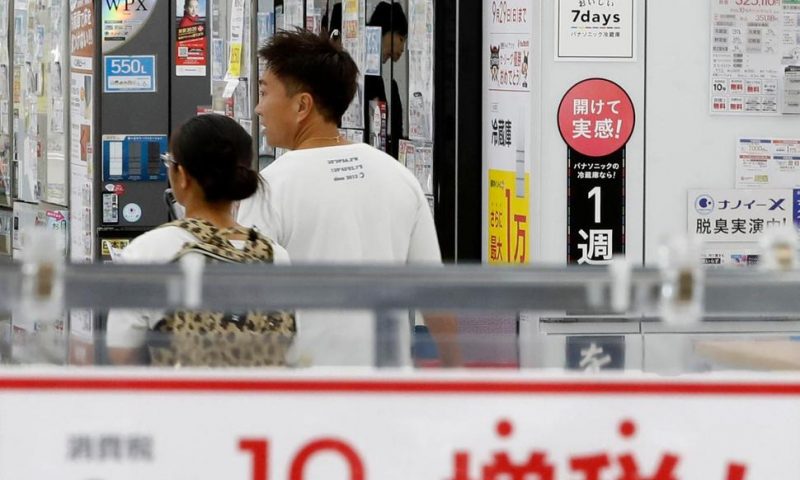 TOKYO — Japan’s national sales tax was raised to 10% from 8% on Tuesday, amid concerns that the long-delayed move could derail the fragile growth path of the world’s third largest economy.

Government officials say ample measures have been taken to minimize the impact of the hike, which took effect Tuesday. Previous tax increases, a 2-point increase to 5% in 1997 and another to 8% in 2014, brought on recessions.

Prime Minister Shinzo Abe postponed this hike twice but said it was unavoidable given rising costs for elder care and a growing national debt as the population ages and shrinks. After decades of fiscal deficits that have taken the debt to more than twice the size of the economy, Abe has promised a return to balance by 2025, but that will require the economy to continue expanding at a healthy pace.

The economy expanded at an annual pace of 1.8 percent in April-June, faster than anticipated. But slowing exports and rising prices for oil are expected to drag growth lower in coming months.

The increase covers most goods and services from clothes, electronics to transportation and medical fees, but the government has sought to soften its impact with tax breaks for home and car purchases. It also kept the tax for groceries unchanged for low-income households and is providing free pre-school education to families.

“We’ll take expeditious and utmost efforts to ward off any risk of a downward swing in the economy,” Chief Cabinet Secretary Yoshihide Suga said on the eve of the tax hike.

Analysts say the tax hike poses a deflationary risk at a time of growing uncertainty over trade tensions between the U.S. and China.

He noted that the economy has slowed since late last year and that demand generated by the construction boom for the Tokyo 2020 Olympics has faded. The fear is that might undo years of efforts to escape a deflationary rut where falling prices due to slack demand depress investment, a main driver of growth.

The tax hike will put an estimated additional burden on households of more than 2 trillion yen ($18 billion).

The exceptions and incentives built into the new sales tax regime are causing confusion. For instance, purchases “to go” at Starbucks Coffee outlets are still taxed at 8%, while customers choosing to dine in have to pay 10%.

Businesses are adapting with price cuts and rewards for cashless payments to attract customers. So economists said there was not a huge rush to beat the increase. That may mean the higher tax’s impact will be less severe than the blows of previous hikes.

“Stores seem to provide discounts, so I will go for those, plus, I don’t plan to buy luxurious goods with big price tags,” Junko Matsumoto, a company employee in her 60s, said as she walked past a Tokyo train station. “I must admit the tax increase was unavoidable.”

“The government should have taken other measures before resorting to a tax increase,” he said. “I don’t think my shopping patterns would change very much, but I may not be able to go on trips as often as used to.”

US patience with Iran not inexhaustible, warns Saudi Arabia