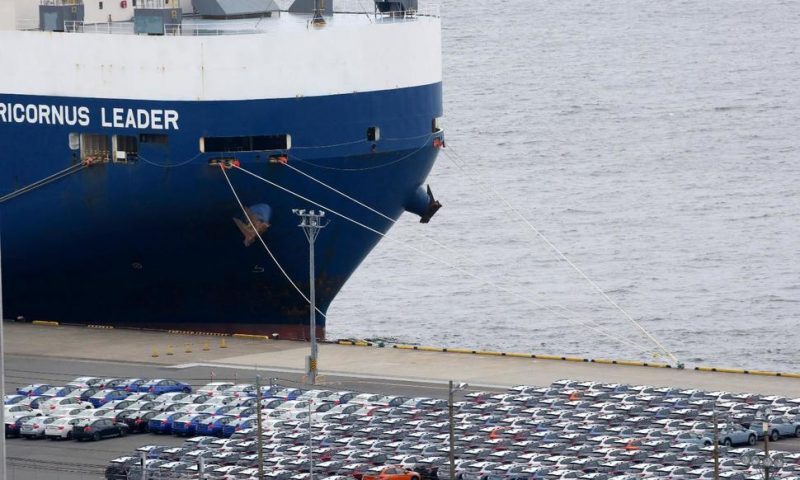 TOKYO — JAPAN’S exports fell for a 10th straight month in September as trade tensions between the U.S. and China hit demand for machinery and other manufacturing mainstays, the government said Monday.

Exports fell 5.2% from the same month in 2018, with slower shipments of machinery, vehicles and auto parts. Imports dropped 1.5%.

But there were signs of improvement in demand for semiconductors, suggesting a slump in the sector may be bottoming out, economists said.

Exports of semiconductors rose 4% from a year earlier despite double-digit drops in most other categories of electrical machinery. Exports of integrated circuits jumped 9.1%, the data showed.

Export volumes stabilized somewhat, while the value of exports fell due to weaker prices.

“The risk that exports will shrink drastically has subsided, but it is expected that time will be needed before exports can recover considerably,” said Harumi Taguchi, an economist with IHS Markit.

The tariff war between the U.S. and China has taken a toll across the region, hurting manufacturers within extended supply chains. Meanwhile, a dispute between Japan and South Korea over exports of certain high-tech goods has added to uncertainty.

Japan’s exports to South Korea sank nearly 11% from a year earlier in April-September and 16% in September. The declines were biggest in key categories such as semiconductor manufacturing equipment and other high-tech components.

Given the weak demand from Japan’s main trading partners, it’s “too early to sound the all clear,” Marcel Thieliant of Capital Economics said in a commentary.