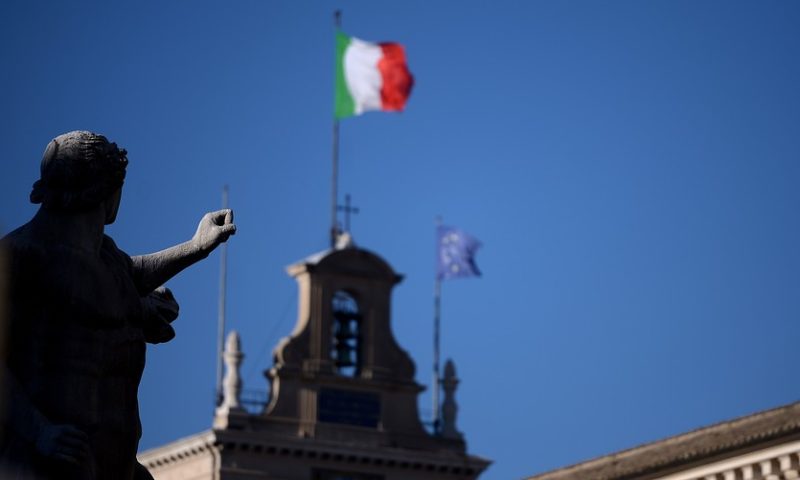 Italian stocks finished a choppy session near break even after an European Union commissioner offered comments that reduced—for the moment—concerns about the country’s budget plan. But concerns on a clash with the EU pushed the index to a weekly loss.

Italy’s FTSE MIB Italy index I945, -0.04% ended down less than 0.1% at 19,080.16, resulting in a weekly skid of 0.9% and its fourth straight weekly slide, representing the longest such decline since a five-week retreat ended June 8, according to FactSet data.

EU Commissioner Pierre Moscovici said that no decision had been made on Italy’s budget proposal, which helped to pare steeper losses earlier in the session.

European trading had been marked by a surge in the 10-year Italian government bond TMBMKIT-10Y, -2.65% yield which traded at 3.777%, its highest since 2014, on the back of the EU’s signaling that Rome’s budget draft would run afoul of fiscal rules in place for member countries. Meanwhile, the yield for 10-year German paper TMBMKDE-10Y, +10.17% fell to 0.402%, hitting its lowest since September. Investors tend to turn to German bonds, or bunds, as a haven during periods of heightened uncertainty in the eurozone because the country is the largest economy in that economic bloc. Investors pay close attention to the spread between bond yields for signs of stress. Bond prices rise as yields fall, and vice versa.

Earlier in the week, Italy’s government approved a draft budget law for next year, confirming a set of expansionary measures that could lead to a fast-rising deficit.

The planned measures included in the draft law are set to widen the budget deficit to 2.4% of gross domestic product. EU officials fear the real deficit could be much higher than 2.4%.

The full draft budget law will be submitted to the Italian parliament by Saturday.

A clash between Rome and Brussels could further rattle European markets if it intensifies, market participants have warned.

Investors also watched U.K. Prime Minister Theresa May’s efforts to forge a new trade and customs pact with the EU as Britain is set to relinquish its membership in March. On Thursday, May indicated that an extension of the U.K.’s current EU status could come into play because of unresolved differences between the parties.

European traders also were keeping an eye on tensions between the U.S. and Saudi Arabia as Treasury Secretary Steven Mnuchin on Thursday announced that he was pulling out of an investment conference in Riyadh in response to the disappearance of Saudi journalist Jamal Khashoggi, a U.S. resident.

“While there was no clear trigger behind this shift, renewed concerns around Italy’s budget, disappointing earnings from industrial firms, still-elevated U.S. bond yields, and the prospect of a fallout in U.S.-Saudi relations may have all contributed,” wrote Marios Hadjikyriacos, analyst with brokerage XM, in a Friday research note.

Auto stocks led the decliners, with Daimler AG DAI, -0.96% finished down 2% after a profit warning. Volvo AB VOLVB, -2.19% ended down 2.2% even as it reported an earnings beat and strong truck demand.