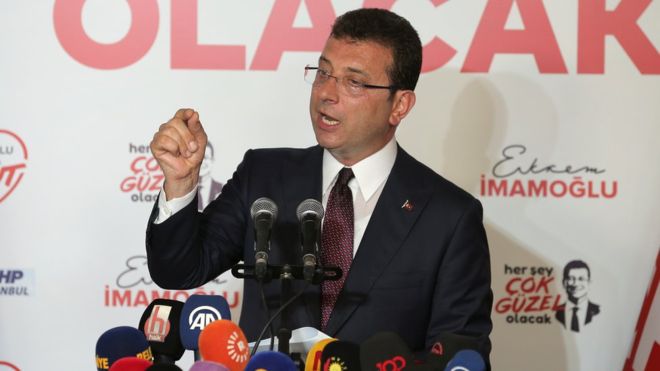 Turkey’s ruling party has lost control of Istanbul after a re-run of the city’s mayoral election, latest results show.

The candidate for the main opposition party, Ekrem Imamoglu, won 54% of the vote with nearly all ballots counted.

He won a surprise victory in March which was annulled after the ruling AK party complained of irregularities.

“I congratulate Ekrem Imamoglu who has won the election based on preliminary results,” he tweeted.

But the result is being seen as a major setback for Mr Erdogan, who has previously said that “whoever wins Istanbul, wins Turkey”.

In his victory speech, Mr Imamoglu said the result marked a “new beginning” for both the city and the country.

“We are opening up a new page in Istanbul,” he said. “On this new page, there will be justice, equality, love.”

He added that he was willing to work with Mr Erdogan, saying: “Mr President, I am ready to work in harmony with you.”

Who were the candidates?
Mr Imamoglu, 49, is from the secular Republican People’s Party and is mayor of Istanbul’s Beylikduzu district.

But his name was barely known before he ran for mayor in the March election.

Mr Yildirim was a founding member of Mr Erdogan’s AKP and was prime minister from 2016 until 2018, when Turkey became a presidential democracy and the role ceased to exist.

He was elected Speaker of the new parliament in February and before that served as minister of transportation and communication.

Why was the previous result annulled?

Mr Imamoglu’s narrow victory of 13,000 votes in March was not enough for Mr Yildirim to accept defeat.

The ruling party alleged that votes were stolen and many ballot box observers did not have official approval, leading the election board to demand a re-run of the vote.

Critics argue that pressure from President Erdogan was behind the decision.

Why is this election so important?
Mr Erdogan, who is from Istanbul, was elected mayor in 1994.

He founded the AKP in 2001 and served as prime minister between 2003 and 2014, before becoming president.

But cracks in the party are now beginning to show and analysts suggest these could be exacerbated by this loss.

“Erdogan is extremely worried,” Murat Yetkin, a journalist and writer, said ahead of the vote.

“He is playing every card he has. If he loses, by whatever margin, it’s the end of his steady political rise over the past quarter of a century,” he added.

“In reality, he’ll still be president, his coalition will still control parliament – although many will perceive his defeat as the beginning of the end for him.”