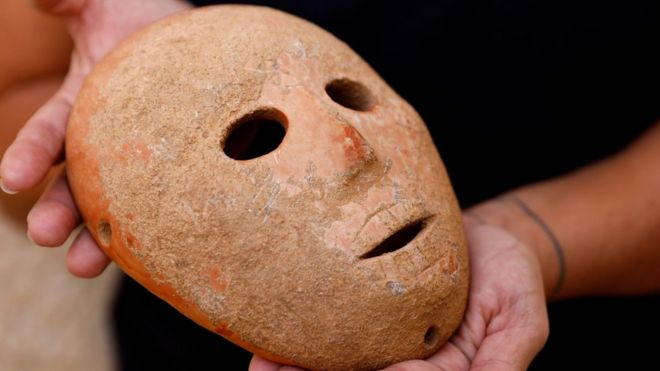 A 9,000-year-old stone mask – one of only 15 in the world – has been revealed by the Israel Antiquities Authority (IAA).

The artefact was discovered in the area of Hebron in the south of the Israeli-occupied West Bank.

It was found in a field and turned over to the IAA. An earlier report which said it was recovered from thieves has been discounted.

Made from pink and yellow sandstone, it was made in the Neolithic era.

“The mask is very naturalistic in the way it was made,” IAA archaeologist Ronit Lupu told news agency AFP. “You can see the cheekbones, you can see a perfect nose.”

Ms Lupu speculates the mask could have been worn as part of ritualistic ancestor worship.

Holes drilled into the sides of the mask suggest it could have also been hung up for display.

In a statement, the IAA said it dated back to the point when hunter-gatherers were beginning early agriculture and domestication of animals, “accompanied by a change in social structure and a sharp increase in ritual-religious activities”.

Thirteen of the 15 masks known about are in private collections, making it harder to study them, the IAA statement said.

Results from an initial study will be presented on Thursday at Jerusalem’s Israel Museum.