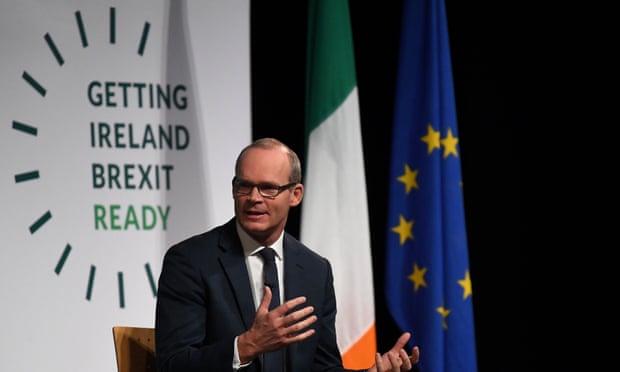 Irish government says security, travel and trade will suffer if UK crashes out of EU

Security in Ireland would be “seriously impacted” by a no-deal Brexitbecause of sudden changes to arrangements with the UK over crime, the Irish government has warned.

It also said Ireland would “suffer considerably” from the “adverse economic and social impact” a no-deal Brexit would have on the UK.

“The Irish government would work with the British government, as a member of the EU27 but also as a neighbour and close friend, to seek to minimise the economic and social disruption,” it said in a 131-page document outlining contingency plans that was released in Dublin on Wednesday.

“However, we are under no illusions as to the difficulties that would arise or the challenges involved in addressing them.”

Ireland would also be affected by “exceptional swings” in the value of sterling, which would have difficult consequences for trade, the finance minister said.

Ireland’s deputy prime minister, Simon Coveney, said: “There is no such thing as a contingency plan that will maintain the status quo … this is a damage limitation exercise.”

The Contingency Action Plan warns of disruption to aviation and road haulage, as well as delays on ferries and problems for exporters to Britain.

The government is also concerned about EU citizens moving between Ireland, Northern Ireland and mainland Britain.Advertisement

“There would also be significant issues for citizens’ rights, free movement of people, labour and skills shortages, and provision of cross-border public services that would have to be tackled by all the relevant parties,” it said.

On security, it said the existing close cooperation with British police would be compromised if the UK lost access to European databases involving DNA, fingerprints, vehicles, criminal records and airline passengers.

Ireland is also worried about the UK dropping out of the European arrest warrant (EAW) system, which would mean criminals could enter the Republic, commit a crime and escape to Northern Ireland.

Police sources have told the Guardian they are concerned about everything from smuggling to sexual crime if perpetrators can disappear in a border area, in the knowledge that the Police Service of Northern Ireland and the Republic’s Garda Síochána no longer exchange information or operate an EAW.

The document also warns that “a deterioration in economic conditions in Britain could impact on exports”.

There would be particular pressure on sectors such as agri-food, fisheries, aviation and road transport, pharmaceuticals, electrical machinery, retail and wholesale businesses, the document says.

Coveney told reporters the report made for “stark reading”. He said a lot of planning at the moment concerned security of medicine supplies, of which there is currently a four- to six-week stockpile.

The Irish government is also planning to buy land in Dublin and Rosslare, County Wexford, in preparation for a no deal, the document reveals.

Talks are also under way with the Dublin Airport Authority to build facilities for veterinary, forestry and sanitary checks including seven inspection rooms as well as ambient, chilled and freezer storage.

In the event of no deal, all animals coming into Ireland from the UK will have to undergo checks. Livestock leaving Ireland and going through the UK and on to the EU will also be subject to checks in Calais and other ports.