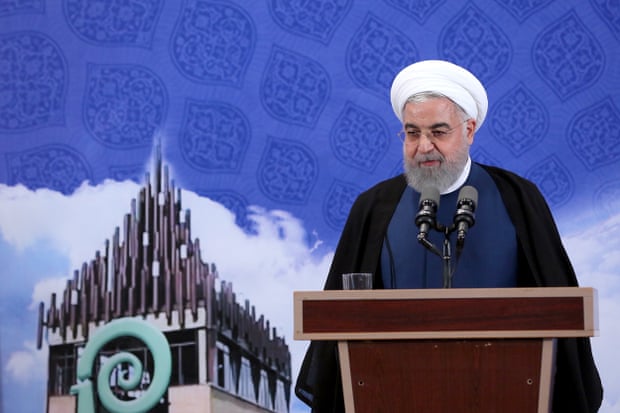 Iran has announced it will take the next step in its stage-by-stage move away from its landmark nuclear deal by injecting gas into 1,044 centrifuges at its Fordow fuel enrichment plant.

The centrifuges have previously spun empty under the terms of the 2015 deal, when Iran agreed to limit its nuclear activities in return for the lifting of economic sanctions.

The Iranian president, Hassan Rouhani, said on Wednesday the step was reversible and did not specifically say if the injection of gas would be used to speed the enrichment of uranium. However, Kazem Gharibabadi, Iran’s ambassador to the International Atomic Energy Agency, later said Iran had informed the IAEA over “the start of injecting UF6 (uranium hexafluoride) into centrifuges at Fordow”.

Centrifuges are machines that spin at supersonic speeds to separate atomic elements. They can be used to enrich uranium as well as other elements, such as xenon and iridium, for medical and industrial purposes.

Feeding uranium gas into spinning centrifuges allows for the separation of a highly radioactive form of uranium, U-235, which can be split to produce power in nuclear reactors.

If the use of gas at Fordow is intended to enrich uranium, the step has the potential to put Iran much closer to 20% uranium enrichment.

U-235 must make up 3-5% of uranium to be of commercial use for nuclear power and a 85-90% concentration for a nuclear weapon. But the most laborious part of enrichment is between 0-20% – once this level is reached, enrichment can be boosted to 90% quite rapidly.

Iran says it currently produces uranium enriched at 4.5% U-235, in breach of the 3.67% limit set by the nuclear deal, known as the Joint Comprehensive Plan of Action (JCPOA), but nowhere near the 20% level required for research reactors.

Ilan Goldenberg, Middle east security director at Centre for a New American Security, said: “Rouhani’s announcement that Iran will start spinning 1,000 centrifuges at Fordow is by far the most significant step Iran has taken outside the JCPOA, and another sign that Trump’s maximum pressure campaign is failing.”

Iran has gradually shelved its commitments made under the deal with world powers in response to the US maximum economic sanctions programme imposed last year. That programme has blocked Iran’s oil exports, damaged its currency and interfered with the flow of medicines.

Reactions to the Iranian decision from JCPOA signatories were initially hostile. The Kremlin said on Tuesday it was concerned by Iran’s intention to further scale back its commitment to the 2015 nuclear deal, and that Moscow would like the deal to remain in place. The French government said the announcement was a breach of the JCPOA, but would await the formal report from the International Atomic Energy Authority on the decision’s implications.

JCPOA’s collapse coincided with a tense summer of attacks on oil tankers and Saudi oil facilities that the US blamed on Iran. Tehran denied the allegation, though it did seize oil tankers and shoot down a US military surveillance drone.