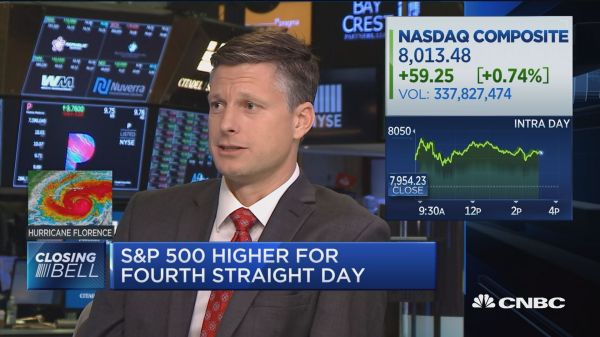 “Ultimately, really, whether [trade tension] becomes more posturing and sides are able to negotiate their way to a reasonable conclusion or whether we do have a couple more rounds of tariffs is really going to be key,” she said in a “Power Lunch” interview.

“Our advice is not to react at this point, but, again, to stay positioned in your U.S. equity positions, as it is, and continue to monitor your position,” said Erickson, senior vice president and head of traditional investments group at U.S. Bank.

Stocks rose on Thursday, boosted by lower rates stemming from weaker-than-forecast inflation data as well as a rebound in Apple shares. Equities came off their highs, however, after President Donald Trump said there was no pressure to strike a trade deal with China.

The Dow Jones Industrial Average rose 131 points, with Apple contributing the most to the gains. The S&P 500 climbed 0.5 percent, led by gains in tech. The Nasdaq Composite advanced 0.9 percent. The Dow had gained as much as 192.72 points, while the S&P 500 and Nasdaq rose as much as 0.6 percent and 1.1 percent, respectively.

In spite of ongoing tensions with China, Erickson said that “from the top down” the U.S. economy looks “very good.”

“We are cautiously optimistic,” she said. “Two-thirds of both coincident and leading economic indicators are still in positive territory. And, as you know, corporate earnings are very good. So, there is reason to be comfortable with the U.S. equity market.”

Nela Richardson, investment strategist at Edward Jones, said she feels comfortable with small- or mid-cap stocks in the U.S.

“We think that they are more insulated from these trade tensions and therefore a good opportunity,” Richardson said Thursday on CNBC’s “Closing Bell.”

For large-cap stocks, look internationally, Richardson said, especially in light of the good economic news coming out of Europe.

The European Central Bank left benchmark interest rates unchanged on Thursday. In a subtle change to the bank’s guidance, the ECB announced plans to end bond purchases at the end of the year and keep interest rates at record low levels at least through next summer. With inflation rebounding and economic growth leveling off at a relatively stable pace, the ECB has been gradually removing crisis-fighting stimulus for months.

“Europe is ready with fundamentals in terms of a good jobs market, higher wages, but still no increase in interest rates,” Richardson said. “Those fundamentals are strong, large-cap stocks out of international environment, they have higher dividend yields, they have better valuations than the U.S. companies, so this is a great opportunity.”

“We are taking a more ‘wait and see’ attitude on the tariff issues. Certainly it is a key risk to what may happen in the economy and the markets going forward, but these things are very difficult to predict,” she said.