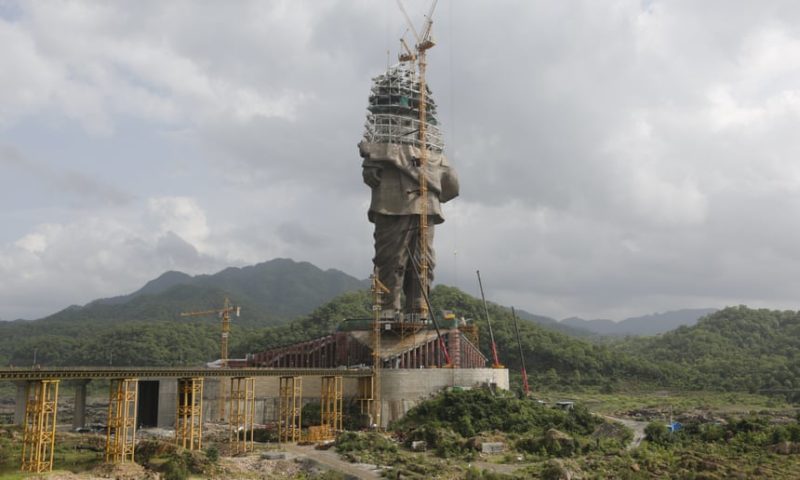 Sardar Patel statue to stand 182m tall, then be surpassed in 2021 by Shivaji memorial

However, the reign of the 182-metre structure as record holder could be short-lived, with work due to begin on an even larger statue of a Hindu king off the coast of Mumbai.

The two statues have strong resonance for the Hindu nationalist movement, which has been on the rise in India, and will cost a total of nearly £700m to build.

The 29.8bn rupee (£314m) Statue of Unity, which Rupani said is being built with iron, water and soil collected from across India, will be about twice the size of New York’s Statue of Liberty.

The planned height of the Mumbai structure, depicting the 17th-century Marathi ruler Chhatrapati Shivaji, was increased this year. Officials made the change after they learned China had raised the height of the Spring Temple Buddha, which is currently the world’s largest statue at 128 metres, not including its base.

“It prompted us to revise our design and increase the height to 212 metres,” the Maharashtra chief minister, Devendra Fadnavis, said. 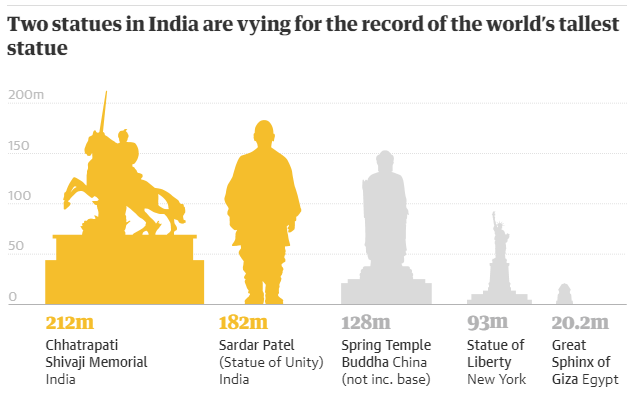 The Patel statue was commissioned by the prime minister, Narendra Modi, when he was Gujarat’s leader in 2013.

Hindu nationalists have adopted Patel, who was born Vallabhbhai Jhaverbhai Patel, as an icon. The “iron man of India” is revered for persuading, sometimes with threats of force, the more than 550 princely states that existed in the country during the colonial era to join the Indian union.

Modi has lamented that Patel was passed over for the role of prime minister after independence – he was the deputy to Jawaharlal Nehru. Modi claimes – wrongly, according to historians – that the disputed region of Kashmir would have been fully Indian had Patel become leader.

Historians say the reverence for Patel is an attempt to sideline Nehru, the proponent of a secular India which is at odds with the religious nationalists’ vision of a Hindu rashtra, or nation.

“They’ve been trying to appropriate Patel for years, because they don’t really have a position in the freedom movement themselves,” said Anirudh Deshpande, an associate professor of history at Delhi University.

The Shivaji statue is scheduled to be completed around 2021 at an estimated cost of nearly £380m.

Shivaji, shown in the statue on a horse with his sword drawn, fought wars against Muslim Mughals and other Indian and foreign rulers for years to establish his own kingdom on the Arabian sea.

Since his death in 1680 he has become a symbol of Hindu sovereignty and resistance to Muslim rule. However, many historians argue medieval Indians had a nuanced understanding of religious difference and did not relate to each other as monolithic Hindu or Muslim groups.

According to a security proposal submitted to the city authorities, the statue will stand on an island about 2,000 metres out to sea that will be patrolled by speedboats and ringed by a 14-metre fortified wall.

A complex attached to the structure will house a museum, food court, art gallery, viewing deck, amphitheatre and helipad.

The proposal has upset fishermen, who say the 6.8ha of land that needs to be reclaimed to build the statue will damage the environment. Residents have also questioned why, in a city of striking poverty and underfunded hospitals and schools, so much money is being spent on the structure.

“This is taxpayers’ money and I am sure we would all like this money to be spent on something better like education, infrastructure, and food,” said an online petition by a Mumbai journalist Krishma Upadhyay opposed to the project.

Moon Faces Toughest Challenge Yet in 3rd Summit With Kim