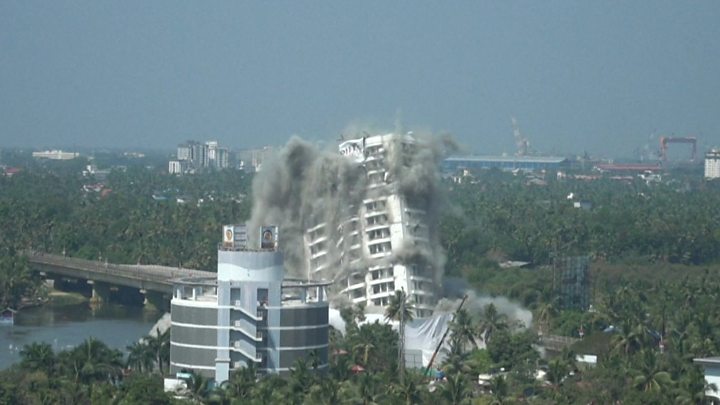 Authorities in southern India have demolished two luxury lakeside apartment complexes that were built in violation of environmental rules.

Residents of the high-rises in the state of Kerala watched as their homes and investments imploded in seconds.

The Supreme Court ordered the demolition last year, after a committee found that they were built in breach of rules protecting coastal areas.

Two more skyscrapers were set to be razed on Sunday.

In total, some 343 flats – home to about 2,000 people – were expected to be destroyed over the weekend in what has been described as one of India’s largest demolition drives involving residential buildings.

The H2O Holy Faith complex, containing 90 flats, was the first to be brought down on Saturday. It took just seconds for the 19-floor building to be destroyed in a controlled implosion.

The twin towers of Alfa Serene were next.

Resident Shamshudeen Karunagapally said his wife and children could not watch the buildings go down as it was “too painful for them to see their dreams shatter before their eyes”.

“We are suffering without any fault,” he told AFP news agency.

How did we get here?

The Kerala Coastal Zone Management Authority (KCZMA), which was created to prevent degradation of coastal and marine areas, says permission for the buildings to be constructed was given by local officials without its approval.

The KCZMA said the location of the apartment complexes, in the municipality of Maradu, was a critically vulnerable area where no new construction was allowed.

After they were built, bankers, executives and affluent retirees were among those who bought up the luxury apartments. One bank executive told the BBC last year that he had spent what would now amount to $70,000 (£55,000) to purchase a 2,140 sq ft (198 sq m) flat in Alfa Serene in 2006.

But in May, the Supreme Court ruled in favour of KCZMA and ordered the demolition of the buildings, although officials had never sought it.

The court said builders were in breach of construction rules and called illegal construction in the area a “colossal loss” to the environment.

It also referred to the devastating floods in Kerala in 2018 and said they were the result of “the entire environment being degraded and coastal zones being illegally occupied”.

Following the top court ruling, some residents initially refused to leave. But officials cut water and electricity supplies to the buildings, leaving them with no choice but to go.

The state government has been ordered to pay “interim compensation” of about $35,000 (£27,000) to affected residents, according to local media reports.