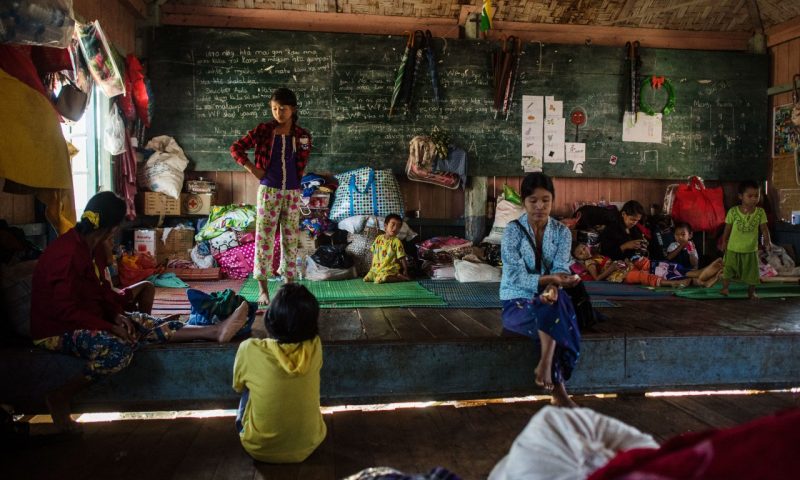 Recent overtures suggest the government may be serious about ending years of conflict in its northern state.

MYITKYINA, MYANMAR – The Jan Mai Kawng Baptist Church camp for internally displaced people is located on the outskirts of Myitkyina, the capital of Kachin state. Home to more than 1,000 people uprooted by conflict across Myanmar’s most northern state, Jan Mai Kawng is a bustling place, where camp residents have established businesses, including restaurants, shops and even a makeshift hairdresser.

Among the entrepreneurial tenants is Kai Ra, 52, who has established a small operation selling secondhand clothes in the camp. If business goes well, she can make about $7 a day, but acknowledged that on some days there is no income.

“In my home village, I worked on the land and could live off it, but I have no land here,” she says, standing outside her home in the camp. “I miss my home, and I miss my livestock: my chickens, my cows and my goats. I miss everything, but I can’t go back home at the moment. It’s not safe.”

The conflict between the two groups has been ongoing for decades, with occasional periods of peace in between. In June 2011, a 17-year cease-fire broke down, and since then almost 100,000 people have been displaced in Kachin, according to the United Nations.

The fighting in Kachin is part of larger conflicts in Myanmar that date back decades in which the ethnic Buddhist Bamar majority in the country’s central regions has sought to dominate dozens of mainly non-Buddhist ethnic minorities spread primarily across the mountainous border regions. The groups include the Rohingya, a Muslim group that has faced years of persecution. In mid-September the United Nations warned that the group faced threats of genocide from the Myanmar Army.

‘Not a Happy Place’

Despite the relatively brisk activity at the Jan Mai Kawng camp, below the surface is an underlying anxiety among residents who worry they will not be able to return home soon.

“This is not a happy place, but we have no choice but to stay here,” says Kai Ra’s neighbor, Seng Myet, 62. “I have less and less hope that I will be able to go back to my home village. I will only go if things become stable there, but right now I’m afraid to go.”

Frustration at the lack of progress in solving the civil war is increasingly common across Kachin, says Seng Hkum, a local activist. The major concerns raised by the displaced include ongoing fighting, restrictions on movement and the presence of land mines.

“Right now, people have no idea where the peace process is going. They have lost faith,” he says. “People do not really want to talk about it, because it has been such a long time without progress. Instead, they want to know how they can find work, because the economy is not good.”

In the past year or so, authorities in Myanmar have taken some measures aimed at ending the Kachin conflict, but with limited success. In June 2018, the government said it was working on a plan to close camps for the displaced in four states and regions, including Kachin and neighboring Shan, and in December the military announced a monthslong cease-fire covering the two states. However, the cease-fire has coincided with renewed conflict in Shan between the Tatmadaw and a group called the Northern Alliance, which comprises the Arakan Army, the Ta’ang National Liberation Army and the Myanmar National Democratic Alliance Army.

Government spokesperson Zaw Htay said in a recent news conference that the military was trying to sign cease-fires with the armed groups operating in northern Myanmar, including the KIA, but so far with no success. A Sept. 17 meeting between the military and the four groups did not lead to a breakthrough in discussions, but more talks are planned in the future.

Although the plan to close camps for the internally displaced people, known as IDP, across the country has been met with skepticism in some quarters, others have argued that the plan, coupled with the cease-fire, provides a potential opening for progress in the Kachin conflict.

In a briefing published in May, the International Crisis Group said that the two measures had “created a significant opening to accelerate IDP returns and resettlement.” However, it also warned that actions, such as hurried surveys and “military-led resettlement activities seemingly undertaken without sufficient regard for IDP safety” had contributed to mistrust of the process.

“In Kachin state, it is positive that all sides – including the government and the KIO – have publicly stated that they want IDPs to be able to return home or resettle as soon as feasibly possible,” says Thomas Kean, author of the ICG briefing. “There is also strong in-principle support from Kachin civil society – in fact, they have been important players in the process to date.”

Kean highlighted the importance of authorities consulting with IDPs and providing them with clear information, in order for local communities to have faith in the returns and resettlement program.

“At the moment, negotiations are taking place at a high level between the government, Tatmadaw and KIO, and information sharing with IDPs has not been as good as it should be,” Kean says. “It’s important that the civilian side of the government, not the military, is driving the process in consultation with Kachin civil society and IDPs themselves.”

Such moves will be crucial to improving confidence among the IDPs, many whom have little faith in the resettlement process. A U.N. survey published in April found that only 6% of respondents said they felt they could return to their place of origin. The main concerns highlighted by the IDPs included a lack of freedom of movement and continued insecurity.

Nang Mai, 27, is another Jan Maw Kawng resident who says she wants to return to her home village, but is scared about the continued presence of soldiers in the area.

“I hope he will not grow up here, but that he will have a good life and a good job,” she says, holding her 6-month-old son. “But for now we have to stay here. I hope it’s not for long.”