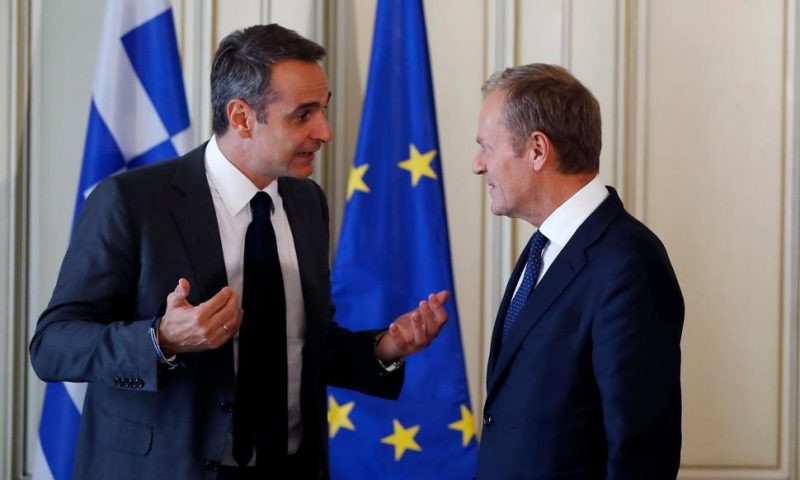 More than a year after Greece exited its bailout programs, investors _ in a historic first _ bought its short-term debt Wednesday at a negative yield, meaning that in theory they volunteered to get less money back than they paid.

ATHENS, Greece — More than a year after Greece exited its bailout programs, investors made history in the country Wednesday by buying its short-term debt at a negative yield, meaning they volunteered at least in theory to get less money back than they paid.

Greece’s debt management agency said it raised 487.5 million euros ($535 million) selling 13-week treasury bills for which the yield was -0.02%. Prime Minister Kyriakos Mitsotakis said the sale of bills with a negative yield was a first for Greece..

“To put it simply, we’re being paid to borrow money,” Mitsotakis told his center-right party’s lawmakers.

Other European countries offer even measlier returns on their treasury bills.

Lending at a loss, however small, appears daft. But many investors see government bonds as a safe place to channel excess liquidity amid global instability and stock market turmoil; the negative yield means they are willing to pay a fee for that safety.

Negative rates in Greece and elsewhere in Europe also result from European Central Bank monetary stimulus. The bank plans a new round of bond purchases, which would pump newly printed money into the economy to support stronger inflation and growth.

The expected purchases have driven government bond prices up and yields, which move in the opposite direction, down into negative territory at times.

With more negative yields on the debts of other countries, Greece offers better terms for those determined to buy short-term debt.

At the start of its financial crisis, in 2010, Greece was locked out of bond markets as investors feared they wouldn’t get their money back. Bondholders were in fact later forced to accept large losses on their investments.

From then until August 2018 Greece survived on international bailouts that were provided on the condition the country balanced its budget, cut spending, increased tax revenues and reformed the economy.

Greece’s borrowing costs have declined steadily this year but remain higher than those of other European countries that went through recent financial rough patches, such as Italy, Spain, Cyprus and Portugal.

Analyst Manos Chadzidakis, the head of research at Beta Securities, said the decline in Greek yields would benefit domestic corporate borrowing costs, which rocketed during the financial crisis.

“It’s a good window of opportunity for companies,” he said.

On Tuesday, Greece raised 1.5 billion euros ($1.65 billion) by reopening a bond issue that was Greece’s first of benchmark 10-year bonds since 2010. The sale carried a yield of 1.5%, substantially lower than the 3.9% yield for the main issue in March.