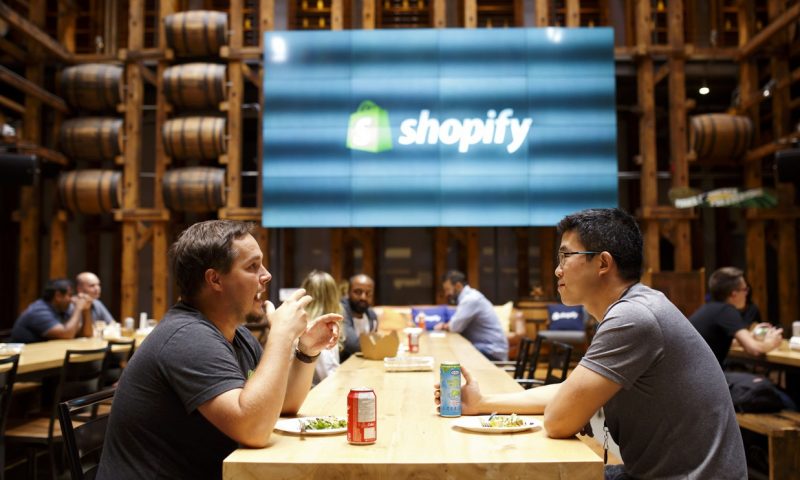 Nortel, Research In Motion/BlackBerry, Valeant — “the history of being the largest growth stock in Canada has not been great for shareholders,” says Ritholtz Wealth Management’s Josh Brown, who admits that he’s “just a little bit kidding” with that shot at our neighbors to the north.

But the “Reformed Broker” blogger is not kidding when he says that Ottawa-based Shopify SHOP, -4.19% is looking extremely top-heavy.

Just look at this chart:

As you can see, Shopify’s market cap just topped $120 billion and the stock price has pushed past $1,000 a share. “It’s very rare to have a company of this size see a quintupling of its valuation over the course of just a few months, but for Shopify, it’s just happened,” Brown wrote.

The torrid performance is just another example — a wildly successful example — of a company that has benefited from the shifting landscape amid the coronavirus outbreak.

“Shopify’s software and services are used by traditional retailers who want to go online and compete with the Amazon AMZN, +5.76% juggernaut,” he said. “It’s a great story and a huge opportunity.”

But has it come too far too fast and does it risk getting crushed under the weight of expectations?

Shopify is trading at 2,000 times estimated current year profits and is close to 60 times current year sales, which makes it the most richly valued large-cap company outside of the biotech sector, according to Barron’s technology columnist Eric Savitz.

“Shopify is a fast-growing company providing a useful service,” Savitz wrote. “But if there’s a good argument that it deserves to be the most expensive stock on Earth, I have yet to hear it.”

Speaking of Earth, perhaps the fate of the stock lies elsewhere?

“If you’re a buyer of the stock here, you either think there are millions of new investors coming in behind you who will pay any price to own the stock, or you’re bullish about the e-commerce opportunities post-colonization of Mars, Jupiter and Saturn,” Brown wrote.

The stock market is poised for a 40% drop, warns economist who says the current climate feels a lot like 1929

Will China’s epic 5.7% stock-market rally collapse on itself like 2015?