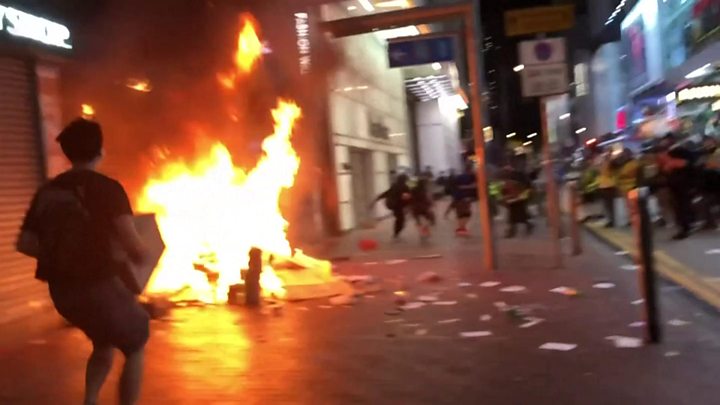 Services had been suspended on Saturday after stations and businesses came under attack in violent anti-government protests the previous day.

Hong Kong had been through a “very dark night” of “extreme violence”, she said.

A number of metro stations in the centre of Hong Kong will remain closed on Sunday for repairs, and train services will end at 21:00, three hours earlier than usual.

Many shops and businesses which had remained closed on Saturday reopened on Sunday morning, but more anti-government protests are expected later in the day.

Unrest intensified on Friday after a young demonstrator was shot in the leg by a police officer.

Protesters have also called on people to defy a ban on face masks announced by Ms Lam.

Unrest in the former British colony started in June, sparked by proposals to extradite suspected criminals to mainland China.

The extradition bill was subsequently cancelled but protests have widened into pro-democracy and anti-police demonstrations.

What did the chief executive say?

“The extreme violence clearly illustrated that Hong Kong’s public safety is widely endangered. That’s the concrete reason that we had to invoke emergency law yesterday to introduce the anti-mask law.”

“We cannot allow rioters any more to destroy our treasured Hong Kong,” she added.

Hundreds of protesters, many of them wearing masks, marched through the Causeway Bay shopping district on Saturday.

“We’re not sure what is going to happen later but we felt we had to get out and show our basic right to wear a mask,” Sue, 22, told Reuters news agency from behind her black mask and dark glasses.

“The government needs to learn it can’t squeeze Hong Kong people like this.”

How dangerous is the situation?

Over the months, clashes between police and activists have become increasingly violent.

Last Tuesday, police shot a protester with a live bullet for the first time, wounding the 18-year-old, who was allegedly attacking a police officer.

On Friday, a boy aged 14 was shot in the leg with a live round in Yuen Long, a town to the west of the city.

A plain-clothes police officer with an unmarked police car was later set upon by rioters in the same area but officials did not link the two incidents, the South China Morning Post reports.

What is Hong Kong’s status?

Hong Kong is a former British colony handed back to China in 1997.

It has a “one country, two systems” agreement that guarantees it some autonomy, and its people certain freedoms, including freedom of assembly and freedom of speech.

But those freedoms – the Basic Law – expire in 2047 and it is not clear what Hong Kong’s status will then be.

Six elephants die trying to save each other at Thai waterfall