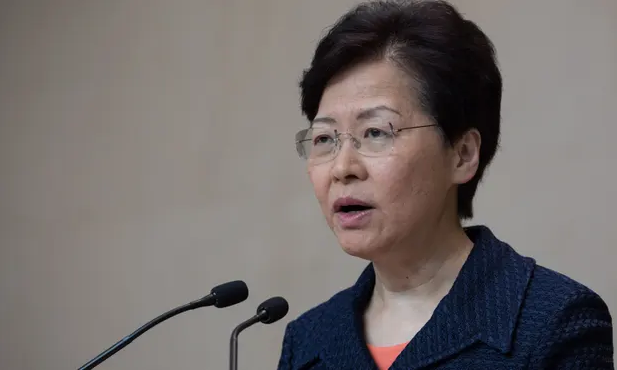 Leader says she hopes calm will now be restored, but protesters dismiss offer as trap

Hong Kong’s embattled leader, Carrie Lam, has said she will “immediately” set up a platform for dialogue with citizens and tackle complaints against the police, after a weekend of peaceful protests that she hoped would be the start of a return to calm in the financial hub. Her offer was dismissed by activists as “a trap”, however.

“Work will start immediately to build a platform of dialogue,” Lam said. “We hope this dialogue can be built upon a basis of mutual understanding and respect to find a way out for Hong Kong.”

She said the platform would be “open and direct” and the government would reach out to people from all walks of life from different political backgrounds.

“I sincerely hope this is the start of society returning to calm and turning away from violence,” she said.

An estimated 1.7 million protesters staged a peaceful rally in torrential rain on Sunday, the 11th week into a wave of mass protests that have often ended in violent clashes between police and protesters. Hong Kong authorities have used teargas, rubber bullets and beanbag rounds to disperse crowds in previous protests but there was a minimal police presence on Sunday and no arrests were made. Hundreds have been arrested since June.

Tensions reached a new level last week with the closure of the territory’s airport, following violent clashes with police.

Lam also said an existing watchdog, the Independent Police Complaints Council (IPCC), would hire overseas experts to help carry out a “fact-finding study” to investigate the incidents in recent months, including an attack by armed thugs at the Yuen Long metro station in July, which left dozens injured.

She said she expected a report, to be completed within six months, would help prevent violent clashes from recurring.

Protesters have demanded a third-party investigation into police actions. It seems unlikely Lam’s promises will satisfy them, as critics say the IPCC comprises mostly pro-government figures who are unlikely to be critical of police.

The wave of protests, which started in early June to oppose a controversial extradition bill under which individuals could be sent to China for trial, morphed into a broader movement in which demonstrators demanded five things: the complete withdrawal of the now-suspended extradition bill; the setting up of an independent body to investigate police violence; a halt to the characterisation of protests as “riots”; an amnesty for those arrested; and a resumption of political reform to allow the free election of Hong Kong’s leader and legislature and Lam’s resignation.

On Tuesday, Lam repeated her earlier pledge that the extradition bill was “dead”.

“There is no plan to revive the bill, especially in light of the public concerns,” she said.

Protesters have demanded its complete withdrawal as there is no institutional guarantee that it cannot be revived.

“Her promises have fallen through every time. If she says the bill is dead then why can’t she just officially withdraw it? You don’t need further communications to do that,” Sham said. “If her offer of communications is just a means to reach her goal then it’s just a trap … Hong Kong people are not as stupid as she thinks.”

Further protests are planned for the next few days. Demonstrators say they will escalate their actions again if the government does not properly address their concerns.

Meanwhile, three people aged between 24 and 35 were wounded, one of them in a critical condition, after being attacked by a knife-wielding man in the early hours of Tuesday while guarding a “Lennon wall”, where people have put up colourful sticky notes with pro-democracy messages. Police found two meat cleavers in the area after the attack at about 1.30am local time in the out-of-town Tseung Kwan O district, the public broadcaster RTHK reported.