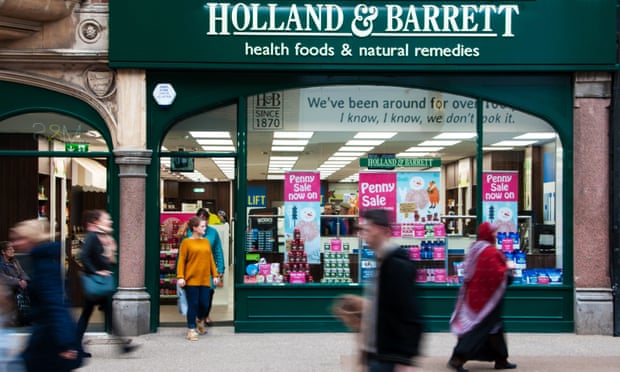 The small business commissioner and senior MPs have taken the highly unusual step of publicly criticising the health food chain Holland & Barrett for treating its suppliers “shabbily”, as part of a crackdown on companies that take months to pay suppliers.

Holland & Barrett was accused of having “a purposeful culture of poor payment practices”, in a damning assessment by the small business commissioner, Paul Uppal. He also condemned the company for failing to cooperate with his investigation.

Uppal pointed to data showing that Holland & Barrett took an average of 68 days to pay its invoices and that 60% of invoices were not paid within agreed terms.

Uppal’s intervention came after his office received a complaint from a technology company over an unpaid £15,000 invoice with Holland & Barrett. The retailer paid in full 28 days after the complaint was submitted to the commissioner.

Although the invoice was relatively small for a business the size of Holland & Barrett, which was sold to a Russian billionaire for £1.8bn in 2017, Uppal’s report said it suggested wider issues.

Uppal said: “Holland & Barrett’s refusal to cooperate with my investigation, as well as their published poor payment practices, says to me that this is a company that doesn’t care about its suppliers or take prompt payment seriously.”

He added: “The government is determined to end the scourge of late payments and bring about a cultural change to deliver responsible payment practices.”

Rachel Reeves, the committee chair, said: “Consumers would be appalled to hear that a big name on the high street such as Holland & Barrett is treating their suppliers so shabbily.

“It is outrageous that a company takes on average 68 days to pay its invoices and pays 60% of them outside of agreed terms. These actions show that it is not only a parliamentary committee and the small business commissioner which Holland & Barrett hold in contempt but small businesses too.

“The behaviour of Holland & Barrett in these instances underlines the BEIS committee’s call for companies who flout the rules to not only be named and shamed but also subject to fines.”

Founded in 1870 and headquartered in Nuneaton, Holland & Barrett is Europe’s largest health food chain, with more than 1,300 stores and a workforce exceeding 4,000. Outside the UK it is biggest in the Netherlands, where it has 182 stores, Ireland, where it has 52, and Belgium, where it has 20.

Holland & Barrett said: “Our agreed payment terms are a standard 90 days, although in fact our average payment time is around 60 days. This is a single complaint and is in relation to one invoice for £15,000 for an IT supplier that was lost in our payment process in the run-up to the busy Christmas period. Once we established what had happened we resolved it very quickly.

“We work hard to help many of our suppliers with easy payment arrangements as many of them are small and just entering the market – Beauty Kitchen, for example, is one of a number of new and smaller suppliers where we have zero-day payment terms or payment by return to assist with their cashflow.”

The government said it was determined to stamp out poor payment practices. The small business minister, Kelly Tolhurst, said: “Over five years the amount owed in late payments has halved, but we are going further. That’s why we appointed a small business commissioner to help recover money owed to small businesses and in the coming months we will set out our response to the consultation on ending the culture of late payments, with plans to level the playing field for small businesses.”

Northern Ireland businesses ‘left to fend for themselves’