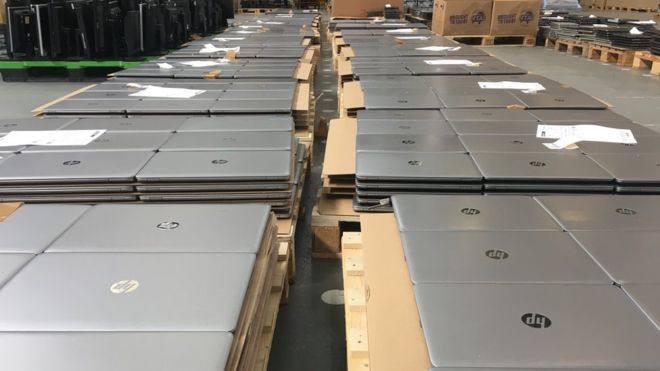 One of the world’s biggest names in computing has committed to maintaining a key base in Scotland, regardless of how the UK leaves the European Union.

HPE said its Renfrewshire site, which refurbishes used technology, was one of the best in the world.

The UK government has outlined several “worst-case planning assumptions” in relation to Brexit.

The Yellowhammer document has raised the possibility of lorries being able to cross easily from the UK in to France.

Speaking at the Hewlett Packard Enterprise facility in Erskine, the company’s Ray McGann said: “The level of expertise and technical capability we have here is extremely important to us and our customers.

“That expertise is the cornerstone of our business and it’s very important to us to maintain that.”

Mr McGann, who looks after the lifecycle of HPE’s assets, said the business had customers right across Europe – but added that it had been drawing on its experience dealing with non-EU countries such as Norway.

“The lack of clarity maybe over the last three years has meant that nobody was taking any particular outcome for granted, therefore the planning would have taken the worst case,” he told BBC Radio’s Good Morning Scotland programme.

He said the company had been working with its carriers, adding: “We have over the years been very focused on ensuring best use of logistics from Europe (such as) making consolidated shipments.

“Our good practices have been maintained through all of the years. They will stand to us, hard Brexit or otherwise.

“We’re confident we have the expertise, the knowledge to support the eventual outcome.”

Meanwhile, Hewlett Packard Enterprise says it is seeing a big change in how its IT customers operate, amid the drive to cut carbon.

Its 150,000 sq ft facility in Erskine plays a big role in handling the four million items of technology the company processed in 2018.

This is also where 89% of used IT equipment taken in from clients is refurbished and sent out again to customers – part of the business model known as the circular economy.

The equipment is also wiped clean of all data before re-use and staff working at the site need a high level of security clearance.

“Nearly 90% of what you see brought in the door is broken down and reconfigured for the next customer,” said Hewlett Packard Enterprise chief sustainability officer Christopher Wellise.

“Just over 10% is recycled in a responsible way and waste is limited to about 0.33% of all the material that’s brought in here.”

Mr Wellise added that only 1% of the environmental impact of its equipment was disposing of it – producing and using IT equipment makes up a much larger slice of the carbon footprint.

He said: “One of the things that you really want to focus on is creating the most energy-efficient products on the planet, and then extending the life of those products – keeping them out of landfill and keeping them in use for longer.

“Our large cloud provider customers – many of them have carbon neutral requirements. One of the things we can do by refurbishing their assets is offset some of the carbon associated with the production of new equipment.

“It’s not technically a carbon offset that you would actually pay for, but it’s a credit on their carbon footprint.”

HPE has now decided to offer all the products it normally sells under its circular economy programme, by 2023.

“One of the ways you can really close that loop is giving access rather than ownership,” Mr Wellise said.

“HPE retains custody of that equipment, therefore that 89% applies to a much broader base, and we’re looking to push that 89% as close to 100% as possible – we’re always improving processes.”