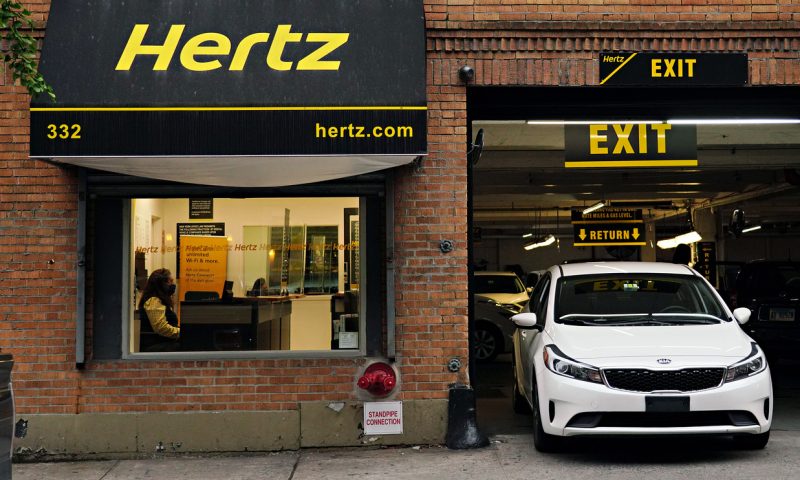 Shares of Hertz Global Holdings Inc. were vaulted higher in very active trading on Monday, enough to erase all the losses suffered since the car rental company declared bankruptcy, amid increasing signs that travel demand continues to improve.

That record low was set the next business day after Hertz declared bankruptcy after the Friday, May 22 closing bell, as the debt-laden company suffered as the COVID-19 pandemic brought travel to a near standstill.

The company has not issued any press releases recently. Meanwhile, filings with the Securities and Exchange Commission over the past several days showed that Henry Keizer, a member of the board of directors, sold 7,438 shares of common stock on June 4 and fellow Director Daniel Ninivaggi sold 3,000 shares on June 5. And Joseph McPherson, executive vice president of North America Operations, recently sold 11,865 shares of common stock.

The company did not immediately respond to a request for comment.

The recent rally comes amid increasing signs that demand for travel continues to improve off the lows seen in April.

Data from the Transportation Security Administration showed that the daily average of travelers going through TSA checkpoints rose to 361,610 during the week ended June 7 from 305,358 the previous week, and has increased every week since bottoming at 97,799 during the week ended April 19, according to a MarketWatch analysis of government data. And the decline in the daily average per week from the same period a year ago has improved to 85.4% from 87.4% the previous week, and has improved each week since topping out at 95.8% during the April 19 week.

Also helping provide a bump, as Hertz has been selling vehicles used as collateral on debt, automotive retailer Lithia Motors Inc. LAD, -1.97% said last week that it experienced “notable improvements” in May across its business lines, after seeing sales declines in March and April as a result of the COVID-19 pandemic.

Nasdaq closes at all-time high, Dow less than 7% off record, as Wall Street looks for Fed to keep support intact

Gold prices end at perch above $1,700 as investors bet on continued central-bank stimulus